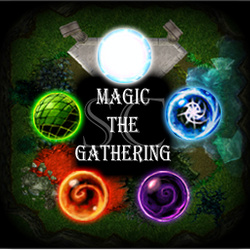 A remake of Starcraft's Magic the Gathering map. Gather mana from combat and at timed intervals, and use it to summon powerful creatures, cast map-affecting spells and invoke potent artifacts! Summon powerful Legendary Creatures or invest in sneaky tactics involving the combinations of different spells and summoned creatures. The last alive wizard standing will claim victory!

Five different colors to pick from, each with its own unique playing style, look and feel! With a thousand different strategies possible, no play-through is ever the same! Dont want to play on battle.net, or having trouble filling your game? No problem! This map comes complete with a functional A.I., so playing against computer-controlled players is an option. Even if human players on battle.net get disconnected, the A.I. will automatically take over.

This easy to learn but hard to master multiplayer map is a Hosted Project of the Hive Workshop.


Visit the forum at
http://www.hiveworkshop.com/forums/forumdisplay.php?f=543
to talk about the map, see preview screenshots, compare strategies or investigate all playable colors' creatures, spells, and more.

Moderator
Dr Super Good: One of our great hosted projects, selected by their time and effort they took to make and the high quality of gameplay.
Read full review...
Reputation Statistics
Page 4 of 5
Show Ignored Content
Page 4 of 5