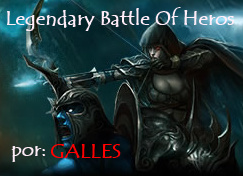 The Burning Legion is back, with the same plan to destroy the world!! Cenarius and his elves need to protect their territory Archimonde and the Burning Legion soldiers!! Choose your side, choose your heroes, team up and defend the side you chose, the world's fate is in your hands and in your team. To win or defeat Archimonde Cenarius!!

Legendary Battle Of Heros 2 features 16 heroes in taverns free choice, also has a cinematic at the beginning of the game, for the players to understand the story a bit after you pick up your hero and gone to war!! Some of the major features of the map are:


IMPORTANT: to get rewarded scrolls, kill enemy heroes or replace with gold in store.
Some else stuff about map:

The map has 3 lanes: MID, TOP, BOT. The style of play is similar to Dota, which creeps out of lanes and their goal is to destroy the towers, until they reach the Cenarius / Archimonde. However, I changed a bit, the top and bot lanes leaving a certain amount of creeps, now in mid Lane, leaving double the creeps, the aim of this is my attempt to keep the players from both teams in the same lane, needing more teamwork.
One of the important things the map scrolls are awarded, it occupied the space that would be wood, these scrolls are worth more than gold and can only be consiguidos if any allied player pass you by buying the store, or killing enemy heroes, to each dead hero you won +1 parchment awarded. With this you will be able to buy scrolls better items in store Magica at its base and can better prepare yourself for war.
Screenshots:

Image Description:
I did the ground with all possible affection, focused to the maximum in the smallest detail, because everyone knows that one of the most important elements in the map is the terrain. Image Description:
Players battling in mid lane, as I said before, is the best mid lane game.

Thanks to these people for systems and models.

Thanks to all who download and play, notice that it is my first map that post here, so if you missed something, just tell me I'll try to fix it. Realize that Legendary Battle Of Heros lacks AI (Artificial Intelligence), so it is possible to play only with players, I recommend 3x3 or 2x2 at least. Please be sincere if they post their opinions.

Daffa
Moved to Substandard since for some reason the non english issue was not addressed during approval.
Read full review...
Reputation Statistics
Show Ignored Content