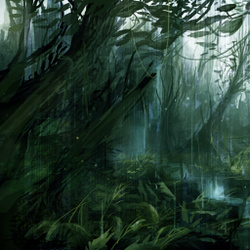 
This is a AOS map with very old roots and i garanty that this map is not a clone of dota even when there are similarities.

I think the greatest difference between Land of Legends
and other AOS maps is that this map is based on abilties and units rather than items and requires more teamplay because the income from creep kills is shared to the team.
In addition in Land of Legends are very much counter items to abilities or other items such as summoning dispell or anti slow boots which makes the game for newcomers very hard when they face heroes they dont know.
You also can say that the 2 different sites Sentinel and Scourge have a different style of play because the Scourge are focusing on summons and support spells which strenghten up there massive army and the Sentinel are focusing on strong stuns and strong heroes to beat there enemies with pure damage.
Another point is that there are 3 different hero classes which seperates the individual heroes from there main task for the team.

The available classes are:

Heavy Melee Heroes are slow moving fat asses with a lot of hp and a high dmg output in lategame.
There main purpose is to hold off the immense dmg from the casters and to get the overhand in melee combat for the own team

Melee Heroes have specialized abilities to initiate a kill or strong support possibilities to strenghten up the main tank or other physical damage classes.

Light Melee Heroes are fast but only have a few hitpoints but usualy they have abilities which gives them the possibility to knock out a single target or to get into the combat nearly unexpectable.
In addition they can have the strongest attacks with the right equipment.
However there possibilities to face a Melee or even a Heavy Melee are very limited.

Ranger Heroes attack from a relatively save distance and their attacks are very effective against caster heroes but they also can become very strong against Melee and Heavy Melee heroes in lategame.
Rangers have a lot of possibitlies to chase down targets and to swap there attack modifiers because they can buy them cheaply.

Caster do not have a single task in Land of Legends because there abilities are to different from each other.
But there are a lot of casters with strong Area of Effect (AoE) spells which helps to dominate the middle lane to get the strong needed gold for the team.

This map was originally created by WoD_ZeeRoX handed over to Vaxan and than to AL_Murder_X who created the prototype of this map with a lot of of bug fixes from the older versions but could not work on it to finish it because of studying and other real life stuff.
So he handed the map over to AL_Fragstealer and me and we tried our best to make our favourite map again as epic as it was before the patch 1.24 destroyed the whole community of Land of Legends (LoL).
The whole Terrain is created by AL_Fragstealer.
I just imported the whole data into the terrain and did a lot of balancing

A great thanks goes to Vexorian for his awesome optimizer because without it this map would take 20 mins to load (no joke) and some functions would not even work.
Another thanks goes out to CrazyRussian for some really great icons which fit perfectly to the map i think.

The bottom lane is a swamp with a lot of vegetation and high grass which blocks the vision which gives new possibilities for hiding and ganking.

The top lane features a mountain like terrain with a goblin mine and a tower which can be occupied to give vision to the forest nearby to get more information about enemy movement.

Nerazhul is one of the worldbosses which can be enslaved when killed to get a perfect pushing possibility or even get out of the enemy siege.

Just an example for some really nice icons from crazyrussian. We are still working on having such icon sets for every hero but we dont want to increase the filesize more at the moment.

CHANGELOG
1.01b
-Fixed some minor pathing issues in the forest
-Fixed a lot of hero descriptions and grammar mistakes

1.12
-relatively many fixes in terrain tooltip and triggering
-readded the sounds which were lost due to merging into the terrain (there is a strange bug which does not allow me to use all sounds ingame even when they are imported)
-Earthmage is now playable without lags
-Minor balance changes

1.14
-made the Earthmage playable
-edited the rest of the hero tooltips

1.15
-Added Creep Respawning System
-Fine tuned a lot stuff
-Hopefully fixed most of the issues which were posted

1.16
-fixed a bug with the charged arrow from the boneranger
-increased the life and damage of some creeps in the forest and also decreased the life of some low level creeps to improve jungling but also making it not to easy to lvl up in it