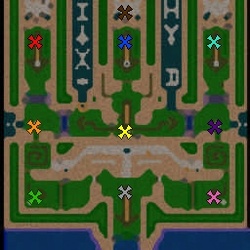 I'm very happy to show all of you my Kindergarten TD!

For people who want to know something about this map before playing it, there's a small FAQ here:


Frequently Asked Questions
What did you change?

This TD bases on the old Wintermaul maps but there's nearly nothing i didn't change:
°All towers (123) and races (10) etc.
°I remade the terrain and did heavy changes to the landscape.
°All special levels (11) were made by me.
°All map specials (e.g. builder teleport) were made by me.
°I improved the unit pathing and added a stuck-teleport.
°I added an XP system based on save/load codes.

What do i have to do?

°The sense of the map is to defend the kinna treehouse from the adults who want to know all your 40 secrets (lives).
°It's your mission to choose one of 10 unique races and beat the adults that try to reach the treehouse.
°Save your amount of XP and enable many features for you to play!

Who helped you to create this map?

°Basically this map is made by me, Dinah.
°Ap0calypse helped me translating the map.
°Some people of this map forum (and some friends of mine) who helped me improving the map and finding bugs.

What makes this map unique and a must have?

Is this map protected?

Yes this map is protected and can't be opened in WE.

What is the sense of the XP system?

Which features can be enabled with higher XP amounts?

Please report bugs\etc. to me.

Moderator
15:22, 14th June 2009, by Rui(#101): A tower defense translated in two languages. There is little else to distinguish it from other maps of the same type. Approved with a 2,5 out of 5 rating, 3 (Useful) approximately.
Read full review...
Reputation Statistics
Page 6 of 8
Show Ignored Content
Page 6 of 8