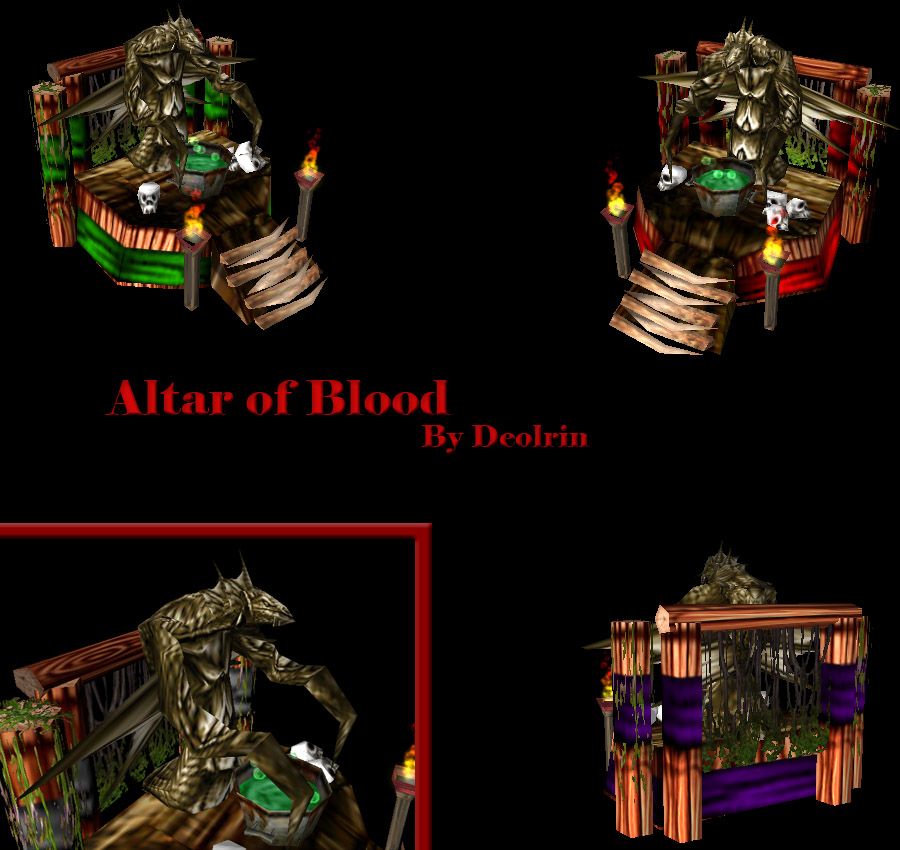 This bundle is marked as approved. It works and satisfies the submission rules.
View usage Statistics
Reactions: hanz3, chr2, NeLtar1on and 6 others
As requested by Kyrbi0.

A trollish altar, made by request for Kyrbi0.
Based on Altar of Kings. It is the first building I created.

The statue is supposed to represent Hakkar the Soulflayer, blood god of the Gurubashi trolls.

In order to make the Birth animation functional, you have to import the AltarOfBloodOrcBirth.mdx file which I attached at the first post(comment), and remove the "war3mapImported\" from its path in the Import Manager.

Portrait is included inside the model.

Stand: Nothing interesting happens, the altar just stands there, there is small fire burning in the torches.

Stand Work: The cauldron is emitting bubbles, there is a bigger fire burning in the Torches.

Decay: The debris stays, there is smoke coming from it. Later, the smoke dissipates. The debris disappears at the end of the animation.

Birth: The base of the altar is showing all along, alongside with the basic Orc building Build\Birth animation. The whole model appears at the end of the animation.

Please give me credits for my work if you use it in your map. Do no redistribute this model to other sites. You may edit this model for your own purposes as long as you give me full credit.

Icon is also in the resource section.

Models 57 Icons 21 Packs 2 Tutorials 1
In order to make the Build(Birth) animation display, you will have to import the attached file to you're map, and delete the "War3imported\" part. Have fun!

Models 3 Icons 52 Packs 2 Skins 30
Looks very nice, debode! Finally someone made an Altar for trolls! I like it, except the back, that could have some work, I guess.

Models 1
Its AWESOME! 5/5
Altar of Hakkar! You did a really good job!
Didnt think that I would see a troll altar.

But you do need to work a little on its behind.
Otherwise its perfect. + rep

So i'm guessing that deolrin is your WC3C user name, Since deolrin put this model on wc3c and since it is the name in the pic. So i sure hope that you really are deolin. lol, just messing with ya. Nice model. Very useful. 5/5

But I don't think that "Altar of Blood" the right name is... There is no blood

Models 57 Icons 21 Packs 2 Tutorials 1
Thanks anyone, for your comments!


FrIkY said:
I like it, except the back, that could have some work, I guess.
Click to expand...

Alagremm said:
you do need to work a little on its behind
Click to expand...

I don't really see whats wrong with the back...? You also won't see this part in-game anyways. Its a "wall of vines", kinda.

But I don't think that "Altar of Blood" the right name is... There is no blood

If you will look at the description, you will see why its called "Altar Of Blood".

Narandza said:
Why a naga for a statue?
Click to expand...

Look at the link of the discription...

First look then leave a reply.

Squiddle said:
But I don't think that "Altar of Blood" the right name is... There is no blood
Click to expand...

That's actually the point. In my dissertation on existing Altars (so that I could accurately Request one for the Trolls), I came to realize that most of the current Altars have as their name something which isn't necessarily an obvious facet of each race.

i.e. Humans have the Altar of Kings. It's a very good portrayal of Human society, but not something obvious. The gold "King" statue ties it in (as well as the royal carpet and pillars.
Orcs have Altar of Storms. "Storms"? Why not "War" or "Blood" or "Steel" or something like that? Because it's pointing more to their recent Shamanistic bent. The statue itself has the lightning along the back 2 pillars.
Undead have Altar of Darkness... Alright, this is somewhat obvious. But it could've been "Altar of Blight", or "Altar of Death", or "Altar of the Dead", or "Altar of Evil"... etc etc etc. Not obvious, and the Altar itself doesn't actually have anything "darkness" related (other than the texture). (an interesting thing to note is the stairs; instead of going up, they appear to be going down, instead, underneat the statue. Catacombs, anyone? )
Naga have Altar of Depths, which is even more obvious. Bleh, you can't win 'em all.
Night Elf is best of all; "Altar of Elders"?? How in the world... First thought is "Altar of Nature", or "Altar of the Forest", or "Altar of Druidism", or anything like that... But no, this point more to the idea that Night Elves, with their (now-gone) immortality and longevity, will of course have lots of old people. Old people are wise, and because of this their society must of course put a lot of respect and value towards the wisdom of people who've attained such an old age. Again, the Altar itself really doesn't scream "ELDER" to me; just a golden statue of some random robed person.

All of this was why I chose to make it "Altar of Blood", not "Altar of Da Jungle" or "Altar of Voodoo", and not fill the Altar with blood (cauldron of blood, blood on the altar, sacrificial table in the middle, bloody runes, bloody SFX, etc). The Blood God Hakkar is a dark and unfortunate time in Jungle Troll history; a time in which they were really having hard times, and turned to the wrong source of power. Even though they "vanquished" him and freed themselves from his blood taint, he would still be a huge part of their culture, and thus architecture. They don't necessarily worship him anymore (at least, they shouldn't ), but it's just an inescapable part of Jungle Troll tribal history.

That, and it's really cool. xD
Thanks again, deolrin; amazing model and a nigh-perfect fulfill-ance of my request.
Last edited: May 12, 2009

I'm just waiting for this to be the next Island Troll Tribes building.

really looks naga-ish... and if you turned it into the skeleton one it'll look undead-ish.

Maps 1 Tutorials 1
Just because you made this I think I'm going to make a whole new balanced race, trolls and try playing as it against a computor and stuff, might even add it to THW. If I do you will get plenty of credit! Aneyway, 5/5

Best fit for my dragon race 4/5

Models 1
Thanks dude, now my Troll Race would be improved. 5/5

very good model, i like it. 5/5 from me. I hope u make more troll buildings

Not sure if i just made an import error, but the portrait mdl doesn't look right. How was that part of the bundle supposed to be used anyway?

Models 57 Icons 21 Packs 2 Tutorials 1
Ah, I'm not sure, because it's been do long, but I do believe the "Portrait" is actually the birth animation. You should change its path to:
"AltarOfBloodOrcBirth.mdx"
You must log in or register to reply here.