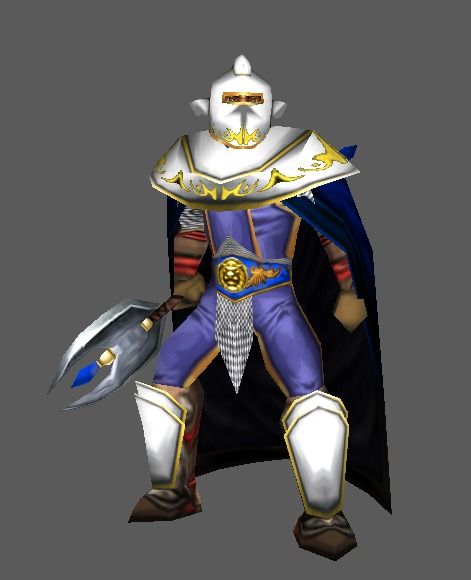 This bundle is marked as approved. It works and satisfies the submission rules.
View usage Statistics Legacy download
Reactions: Yours Truly, deepstrasz, Aleister and 1 other person
So I started finishing old models and thought of uploading them. This is the guard from the RoC cinematic where Arthas kills his father. I always wanted to make him as he is in the cinematic as possible and I am satisfied with the results. The animations are from Direfury's Arthas model he erased, don't know why, so credits go to him too. The portrait file is the model without TC cape.
For now this is just a hero model, I will add decay animations when I find time to do it.

How to import this model Sanity check More info
Reviews
12:09, 5th Jun 2016 The_Silent: The cape kinda goes everywhere in the "attack slam" animation, and the "Spell slam" animations looks wonky. When that is fixed everything seems to be in order.
Read full review...

The_Silent
MODERATION Approved Attack Slam animation looks fine now, spell slam is gone. Not quite what I had in mind with the latter, still, fixed I suppose, haha.
Read full review...

The cape kinda goes everywhere in the "attack slam" animation, and the "Spell slam" animations looks wonky. When that is fixed everything seems to be in order.

Models 2 Maps 8 Spells 12 Tutorials 1
The center of the white parts near the knee and above the shoulders looks a bit... white however awesome model.

How do you mean "hilarious"? I tried to make it as much as possible as shown on cinematic.

Models 117
Yeah, that, only I screwed the part on his mouth.

Stefan.K said:
Yeah, that, only I screwed the part on his mouth.
Click to expand...

It's missing a sort of shine too, though still quite good work.

Skins 4
Should give the helm at royal executioner

Cons: Well, the horns on the side look weird, the bottom of the weapon goes inside his chest during attack animations and goes through his cape during stand animation, and I'm pretty sure you're not supposed to put the sharp part of the weapon on your shoulder (Stand - 2).

Pros: The model overall looks good. Just a few tweaks and it could be a 5/5. I also like the animation (Stand First); it could be very useful for cinematics.

Maps 6 Templates 2
Remove those "ear things" on his helmet and it would be an strong 4/5!

Models 34
I could imagine the ingame text.

The staff clips with the cape during the stand idle animation, and there's a bit of left-elbow clipping with the cape as well. Looks pretty good, though, I'd definitely use it!

Looks a bit skinny, maybe could you give it "more body", like widen his arms, legs and chest.
BTW, Great uvmapping.

Models 59 Icons 115 Packs 8 Skins 16 Maps 1
MODERATION
Approved
Attack Slam animation looks fine now, spell slam is gone. Not quite what I had in mind with the latter, still, fixed I suppose, haha.

Maps 4
Sassy although the weapon's shaft gets through the cloak long time.
4.5/5.

Maps 3 Spells 1
I love the helm xD
Anyway,I like what you tried to do and I think overall the execution was great
You must log in or register to reply here.