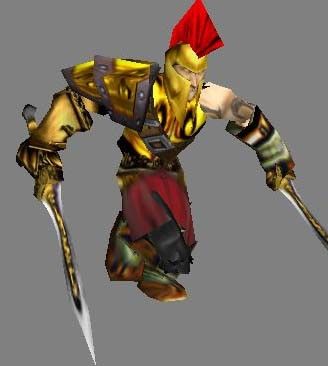 the idea of puting bladestorm anim on it is great, as well as the critical strike

gold color is very better than the old fashioned silver one. Only Deimos can beat this up

Very cool, but it's "Legionnaire."

Finally an age of empires model.
5/5

wow, large poly count! is there any way you could lower this, if so, its an awsome model. Lower the ploly count, and ill give it a 12/10!! i love this model!

Maps 1 Spells 2
Don't have portrait? Ah.. can create the portrait and send to me? Pls, i want to use this model.. definetaly give u credit =) haha! Send to [email protected]

No offense, its cool and all, but it isnt a roman- call it something else.

By lucifer's beard did you read?!?! ROMAN-ISH not to be taken literally. These were characters i've used in my campaign, not supposed to be Roman or Greek, just BASED off of the design. Gah! i know that these aren't exact- there not supposed to be. Rrrrrr stop commenting- stop emailing me, I ALREADY KNOW THEY AREN'T EXACTLY ROMAN! F*CK!

sorry, i've gotten a lot of responses as of late. These models are often interpretations- and usually don't have working names other than the ones i give to them while i'm creating them- hence the names that are fairly vague and general, or the ones that aren't exact (thank god not too many people here played Hexen).

But for pete's sake lighten the hell up people- so what if its not exactly Roman- i told you..."ish"


p.s. and to that last comment- to "call it something else"- i'd have to rename it and resubmit- deal with it, i'm not doing that.

Maps 1
Good animations, bad textures. The model itself is very blury, has little detail, and is kindof misshapen. 3/5 because those animations are good though.

V.nice but ingame the model has a hero glow that flickers on and off every now and agen that should be fixed

not workin out for me but.... probly look really kool

Maps 1
how to import this? i import the model at the following patch:

and the other images at these

then why doesnt it shows up in-game?

Icons 3 Skins 4
yeah, really nice, i like it very much, great idea

But I think it would be better without the hero glow..

Good animations, bad textures. The model itself is very blury, has little detail, and is kindof misshapen. 3/5 because those animations are good though.

Lord Nicodemus said:
No offense, its cool and all, but it isnt a roman- call it something else.
Click to expand...

Gladiators were not the Romans themselves in most cases and were typically people from the provinces or other countries. It is why in the movie Gladiator they call him Spaniard because he was not born in Italy or ethnically a Latin (though the movie is a hit and a miss with accuracy). While this gives me Greek (in particular Spartan) vibes the intention could be that this Gladiator and his other other one are merely intended to be ethnically Greek ones.
You must log in or register to reply here.