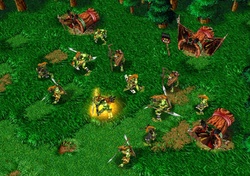 IMPORTANT: Witch Doctor's default portrait doesn't like the TC mask. Modified portrait can be found here.
IMPORTANT: The typo in the Berserker's skin in intentional. Blizzard mistakenly made the path "BeserkHeadHunter" instead of "BeRserkHeadHunter." Took me forever to figure that out. Their fault, not mine, lmao.

Fairly simple reskins of the Headhunter and Witch Doctor units to turn them into forest trolls. Forest Trolls were originally planned to still be part of the Horde in the early days of Warcraft III's development, so I thought it'd be neat to kind of use the Forest Troll and Forest Troll Shadow Priest designs and apply them to the Headhunter and Witch Doctor, respectively, while still giving them my own twist. Will likely add on more units to this bundle later, like a Berserker and Shadow Hunter skin.

Update 1: Added a quick alt version of the Headhunter without TC bracers, for custom model compatibility.
Update 2: Well I was originally going to do a more intricate skin for the Berserker, but I lost the original version I had been working on. Rather than keep you guys waiting even longer for me to redo it, here's a simpler one to tide y'all over.
Update 3: Shadow Hunter has been added to the group!
Previews