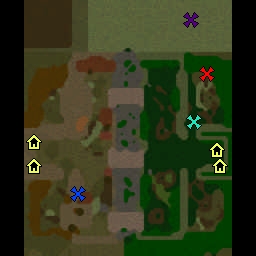 This bundle is marked as useful / simple. Simplicity is bliss, low effort and/or may contain minor bugs.
View usage Statistics Legacy download
Enter the world of Final Fantasy I as one of the game characters and fight with you teammate against your enemies.

Characters in my map mostly use only the models of characters from Final Fantasy VII, everything other is different.

Send me report of any bug in my map.
Also, feel free to send me any suggestions.

Thanks to www.wc3unlimited.com for character models.
Effects are made by Blizzard Entertainment or matija97 [me].

Maps 3 Spells 1 Tutorials 1
Jecht? I mean, isn't the name "Final Fantasy VII Arena"? And isn't Jecht an FFX character?
I can live with Weiss, even though there are many more suitable FF7 characters than him (I mean, he doesn't even appear in the real FF7).

I wonder where you got the models from. Doesn't look legit (and it isn't credited, so that's basically instant-rejection).
The site you mentioned isn't on my "credible resources"-list.
Edit: Oh, and Masamune (Sephiroth's sword) should be shorter than that. Yes, his sword is long, but not THAT long. In your game it's twice Sephiroth's size, while it should be about the same size as himself

The fog is too thick. Increase the Z start.
The grey in the tooltips is too dark, use a more readable color.
No hotkeys?
The duel can start before people even got the chance to read their spells properly.
Only 1 game mode / victory condition? :/
Multiboard is cropped. You need to re-size it.
You can regen near the enemy's fountains.
Spells aren't unique (this is an Arena, spells are a major component and thus need to be good).
Edit: LEAKS! The game starts to lag after using "Explode" too much (and really, your triggering should be improved in general).

Tools 1 Maps 13 Spells 1 StarCraft II Resources 1
The map has been updated, but still rejected -> Leaks are still not removed.
You must log in or register to reply here.