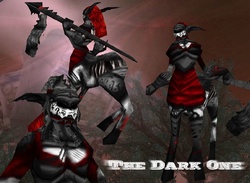 While listening to Ozzy i began to do this early today and after some hours of work with paint.net, it was finished, some parts need work, the legs example. Also there were some nice runes at the lower body, but the model had retarded wrap soi had to make it something more simple. Named it The Dark One, cause i was totally out of good ideas

Get H-res version from here: http://www.hiveworkshop.com/forums/1605551-post3.html
Anyways i hope you like it!

Updated it:
-I added some cloth parts which also brings color to the character
-Increased the area of team colors
-Updated some shading and highlights
-Also reworked the chest part
-Added a mask thingie

Moderator
Kimberly: Hi Gar, this skin needs some improvement....The shading is rather weak and blurry... You might want to define some areas abit more solidly and sharp. Just go over it abit more in a slower and steady pace with a less blurry/soft brush and...
Read full review...
Reputation Statistics
Page 1 of 2
Show Ignored Content
Page 1 of 2