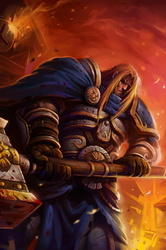 Hi guys, this is my first campaign and i hope you like it.
My english isn't very good so i apologise for that.

Description:
A campaign about Arthas inspired by the human campaign in Reign of Chaos, involving his battles with the Blackrock clan and the Scourge. Some of my maps are similar to the ones in RoC, but with a few changes i've made.
During some parts of the campaign you will control Uther and his army.

Important to note:
* There are also new models and spells.
* Heroes can get to 15 level.
* It's impossible to skip cutscenes, since i didn't know how to do that, so sorry about that.
* Don't use cheat codes, this will ruin the fun in the campaign.
* If you find a problem with my campaign, please write it to me in this thread or in a conversation and i will try to fix it.
* And one last thing, i hope you enjoy it!

Changelog:
1)The grammar is partly fixed-thanks to Championfighter25
2)Captain Falric now has abilities
3)Guard tower(elves) is fixed
4)Footmen no longer change to crossbowmen, you can now train them from the barracks
5)Removed marketplace in chapter 7
6)The undead's attack has returned to normal
7)Uther's book now contains spells
8)The attacks in chapter 6 have become a little easier to defend against and their timing has been changed
9)The time to wait for reinforcements in chapter 6 has been changed to 25 minutes.
10)The time to escape from the cave in chapter 9 has been changed to 25 minutes.
11)In chapter 4 the key will be removed in the end of the mission.

If I missed someone, please PM me and I'll add you.
Contents
Reviews

Admiral Proudmoore
If i could rate the gameplay i would have given it 4/5 stars but the horrible balance,plot holes and horrible grammar killed it.From gameplay,terrain and technical side it's a very good campaign and i must say that story got some potential for a...
Read full review...

Morris
Firstly, you need to improve your thread's description, add screenshots and explain the differences from the original campaign. I understand that you are not good at English so I won't address that problem but you can always find people good at it...
Read full review...