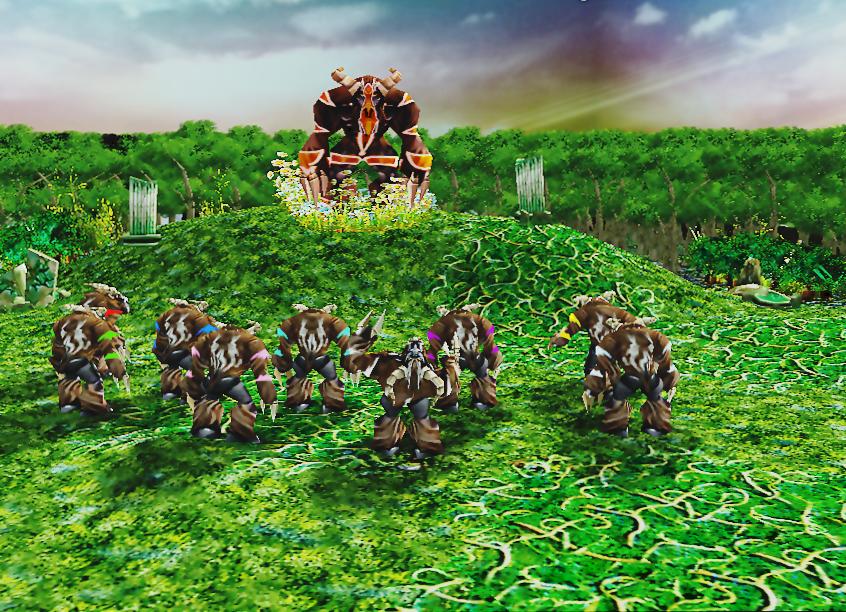 This bundle is marked as approved. It works and satisfies the submission rules.
View usage Statistics Legacy download
Reactions: deepstrasz and Edy
A THIRD PART OF THE SECRET HAS BEEN REVEALED. YOU MUST DEFEAT THE NATHREZIM LORD, IF YOU REALLY WANT TO KNOW WHAT POWER IS....

A PvP/Arena/RPG map, in which the cooperation, and the discussion, between the players, is necessary and inevitable (how ?, I do not know, really). You must ally yourself with your enemies, fight side by side to make your way through formidable enemies to improve your hero, and kill fearsome bosses, then betray your allies and steal all the spoils!

Features:
-Betray your allies, and ally your killers. A complete Alliance System.
-Kill Bosses, to take a lot of Powerful Arctifacts, each one with a spell!
-Complete Quests to gain Quest ID, and change your hero for a better one, with the new Hero Selection System, using items as base! Beware, alll Sasquatch look same, so other player can take credits for your efforts
-Explore Azeroth, with a very fundamented story, Chord of Warcraft Lore
-Discover the Secret of the Closed Door (coming soon)
-Kill everyone, monster, undead, demon or Sasquatch that opposes your rise in power, to be the Great Leader of the Secret Society

Heroes: Every player starts with a Little Sasquatch. By making quests (or just stealing the credit of others, like a good parasite) you can win Quest ID, that can be used to improve your Hero, and change it from another better.
Little Sasquatch:
Abilities:
Enrage: Make this unit attack faster (30/50/70%) and move faster (20/30/40%), but receive more damage (60/40/20%)
Stomp: Strike the earth, dealing 4/7/13 of damage to all enemies, and stun him for 2/3/4 seconds.
Stun: Give a chance (20/30/40%) to stun the enemy for 2/2.5/3.5 seconds, and make 4/6/10 extra damage
Destroy: Liberate all the natural rage of the Sasquatch, moving instantly to the enemy, making 50 of damage to the objective, and 20 to all nearby enemies, stuning him for 5 seconds.
Newcomer Sasquatch:
Abilities:
Lineal Strike: A powerful srike in a very narrow line, but extremely powerful, that cause 100/150/200 of damage.
Roots Shield: Create spines around the caster, dealing 7/14/21 of damage to attacking enemies for 5/6/7 seconds.
Energy eagle: Sends a bird of nature energy that cause 35/65/95 of damage, stuns for 1.5 seconds in a very little area, and start attacking the enemy for 3 seconds. You can´t send orders to the bird, but he is unstopabble.
Treant Lord: Use a little zone of trees to create a Giant Treant with 500 hit points and 35 damage, for 45 seconds.
Sasquatch Destroyer:
Abilities:
Scream: The enemies in a 400/600/800 ratio will be obligated to attack you.
Charge: Makes the unit move very fast for 6/9/12 seconds. If you hit an enemy in this mode, you will stun him for 2 seconds.
Defense Aura: Give 3/5/7 defense points to the alllies in a 450 range.
Destroyer Earthquake: Hit the earth, stun nearby enemies, cause 200 damage, and generate a earthquake that deals 35 damage per second to nearby structures, for 10 seconds. Have an area of 500.
Sasquatch Oracle:
Abilities:
Destroyer Roots: Make roots attack to all selected enemies, stoping, disarming and damaging them for 8/12/16 damage per second, for 5/8/11 seconds. Requires a roots zone to be used.
Nature vengeance: Use trees to create 6/9/12 treants for 10 seconds. The treants have 200 life points and 5 of damage.
Healer Wisp:Call a Wisp, who starts to heal the objective, healing 5 hitpoints per second, and have 200 hitpoints. You can´t have more than 4/6/8. A corpse is needed for the nature transformation into Wisp.
Nature Aura: Activate to heal by 5 hitpoints nearby allies, and damage by 8 hitpoints nearby enemies, in a 900 ratio zone.

7/8 2019: Uploaded
8/21 2019: Updated, to fix most bugs mentioned here: Abelhawk's Mini-Mapping Contest #15 - Results. If there is something else, it is because or i don't know how to fix it, or it is simply intentional (as in the case of the Arctifact items, if they cannot be released, the players will fight for them).
Most important changes: A third part of the secret, some bugs fixed, and two places to use your gold.
9/2 2019: Map updated, some important bugs solved (I hope) and, now, to promove PvP, kill other players Sasquatch will give you gold and Quest ID, depending of the Hero killed.
Credits:

Grey Knight: Tree
Lender: Web
Born²Modificate: Lords_Rock
alfredx_sotn: Spider
-Grendel: Satyr Headhunter
FerSZ: Nathrezim Team Coloured, Infernal, Doomguard, Felguard
Hearthstone: Blizzard Entertainment
HeroAbomination: SuPa-
Alliance Handler v1.5: Faith.
Supertoinkz/assasin_lord: Hero glow
Special Thanks to Hiveworkshop and Blizzard, for making all this possible.
PM if i miss someone. Also, there are a los of other downloaded resources, but, being they aren't used, i don't added credit for this. If a Moderator is not agree, tell me, and I'll change it (treeazha, I think)
Author note: This is for the 15th Mini-Mapping Contest. I really hope this can be considerated as "mini".
It started as a pvp map with some quest, but it just... Evolved.
Note: the map can be played by a max of 10 Players, and each one will be necessary if you want to kill any boss.


Please, don't look the triggers to know the secret. I really want to mantain it as... secret.
Contents

eubz
Sasquatch Secret Society (SSS) Submitted by Leods Here's my short review: First A sasquatch using centaur tents is not a good combination. - There are so many trigger leaks here. Please refer to Basic Memory Leaks - The camera is fixed at the center...
Read full review...

Maps 2
Hey, if you played it, please writte here your opinion! Contact me for any bug, also.

Models 77 Icons 25 Packs 1 Skins 1 Tools 1 Maps 43 Spells 7 Tutorials 7
Sasquatch Secret Society (SSS)
Submitted by Leods
Here's my short review:
First A sasquatch using centaur tents is not a good combination.
- There are so many trigger leaks here. Please refer to Basic Memory Leaks
- The camera is fixed at the center of the map where the hero is not located. Position the camera where the hero is.
- I don't know what to do in game. There are just too many text blocking the screen. These should be cleared out after a minute or two.
- Terrain is too simple, do something more about this.
For now, I think this must be in AWAITING UPDATE

eubz said:
- I don't know what to do in game. There are just too many text blocking the screen. These should be cleared out after a minute or two.
Click to expand...

The same as in many other RPG. I explained everything about quests in the principal quests section. The text is cleared out after to minutes, if i don't remember bad. The time is large, beacuse they are the game characters, and it can explain you how to play the game.


eubz said:
First A sasquatch using centaur tents is not a good combination.
Click to expand...

The adventages of using Sasquatch: There are not any information about them. The name of the house in WE means nothing.


About the other things, I will see it I can change them, being it's a contest entry.
Also, I can't do anything for a week: I am on vacations.

Well, maybe for the memory leaks, but, also using all the map functions, there is no Lag, and obviously there is no crushing game, so this leaks cant be considerated as a breaker of

Leods said:
Well, maybe for the memory leaks, but, also using all the map functions, there is no Lag, and obviously there is no crushing game, so this leaks cant be considerated as a breaker of
Click to expand...

This needs more work, fixes and even more content if possible.

Maps 4
I don't think the Arena tag fits. It's mostly a sort of RPG.

Not sure what has been updated but I got the forest troll quest two times.
Also, all players are in the same team and the map can't be started in multiplayer.

deepstrasz said:
Not sure what has been updated
Click to expand...

Aesthetics
22/31 solved problems. The other things aren't so bad, i must say.
Also, i added a lot of new content. The players start in the same team because, if they didn't, there would be a great slaughter at the beginning of the game, something that would not help the new ones. If you want to make an enemy of a player, it's as simple as attacking him

The map cant be open on multiplayer? It just don't open? That's really strange. I will see that soon.
So far, I guess this is fine where it is.
Last edited: Sep 3, 2019

Leods said:
The map cant be open on multiplayer? It just don't open? That's really strange. I will see that soon.
Click to expand...

Just make every player be in a different team.

Maps 2
I updated this map Yesterday, I hope I solved the bugs, also, I added a reward for kill Sasquatch.

Maps 4
Everyone is still in the same team so it cannot be started in multiplayer.

Maps 2
They aren't. I specifically changed that.
Maybe, I forgot to upload the correct file. I will see it in a few hours.
Edit: Correctly map added. Every force has 2 players, who can see each other.
Last edited: Sep 7, 2019

Yeah, why is the thread name Defenders of Nature and the map's Secret Sasquatch Society?

You should rename Fuerza to Force.

deepstrasz said:
Yeah, why is the thread name Defenders of Nature and the map's Secret Sasquatch Society?
Click to expand...

deepstrasz said:
You should rename Fuerza to Force.
Click to expand...

Again, I didn't found where that appears.

Leods said:
Again, I didn't found where that appears.
Click to expand...

In the game before you start the map.

Maps 2
Contact me to ask for a bug, or just leave your opinion!
I have no problem with the negative criticism, as long as you justify it.
You must log in or register to reply here.

Defend of the Castles