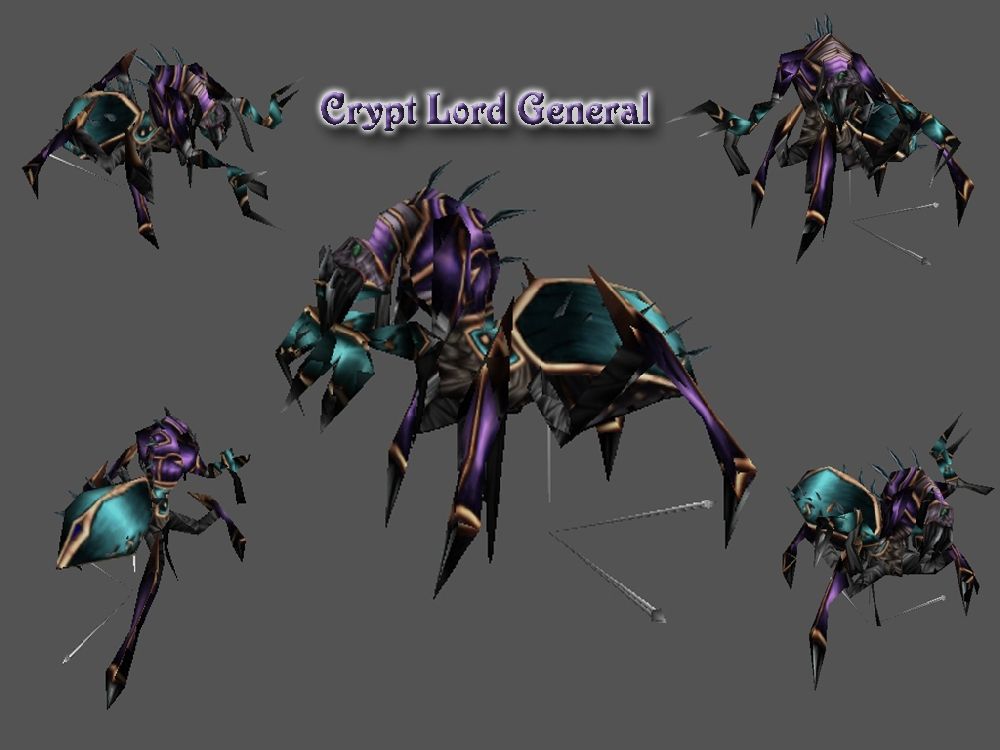 This bundle is marked as useful / simple. Simplicity is bliss, low effort and/or may contain minor bugs.
View usage Statistics
another nerubian conversion by me^^

when you use this remember to import two of this files


Icon will be made by L_Lawliet. Thanks buddy!!

1.) added more details to the face, reduced it's blurryness, and made the eyes stand out more.

2.) added a lil grainy texture on the shell and bandages.

10:00, 23rd Apr 2010
Dentothor: Changes made. Approved. some more changes i would suggest though, is to fix up the eyes and make them look a bit more fancy. because we all know nerubs have more than two eyes at most times ;P

back to the skin: well.. you've done it again. and again XD very good! that's a real nerubian cryptfiend )

You never sleep, do you? Looks good.
Click to expand...

i sleep (sometimes tho) i get a dream about my next skin, heh pretty weird huh. Thanks!!

but this has been done a long time ago...
Click to expand...

Crypt Lord says : I has a evil!

Models 11 Icons 6
ROFL! A nerubian converted to a nerubian. It's a deliciously wonderful conception!

In terms of critique, the bandages and highlights could do with a bit of a grainy texture, as it all looks really smooth and almost metallic as it is. I must say though, i love the fact that you make several skins similar to each other and for different models, it gives map makers a lot of scope and versatility when choosing what skins they want. Up and at dem!

Models 2 Icons 94 Skins 65
I like the armored portions of this skin a lot, but I'm gonna have to agree with Dentothor on the face, it really is one of the weaker parts of the skin. The face is incredibly important as it is viewed in the unit's portrait, which will essentially take up more space in the game view than the entire model. Work on the face some more, I'm liking these nerubian conversions.

I can see nothing what would need improvement

Nillere said:
U all sure? :O
Click to expand...

http://www.hiveworkshop.com/forums/skins-552/cryptbeast-61539/?prev=search=nerubian&d=list&r=20 indeed, it has been done. However, the difference between this one and the one from the link is.. let's say.. great.

Skin: unique.
concept: not that much X3

Models 181 Icons 35 Packs 1 Skins 70
yes indeed crypd beast is justlike this, BUT the crypt beast's armor is just CnP right? with just a touch of recolor and mine is 100% freehand.

oh better improve the face, as it's the only part that needs improvement

Icons 11 Skins 15
Hello dude i see you'r improving in skinnint tha'ts good
however you should redo the whole face,and try to do some helmet
metal/leather helmet will be nice with some arachnid details also some armour or bandages will be cool 2
but overall i like it good job

Ampharos_222 said:
yes indeed crypd beast is justlike this, BUT the crypt beast's armor is just CnP right? with just a touch of recolor and mine is 100% freehand.

oh better improve the face, as it's the only part that needs improvement
Click to expand...

but no matter.. your skin is sweet, just needs a lill more.. spicing up :3

Models 5 Icons 5 StarCraft II Resources 1
Woah, Neat!
You must log in or register to reply here.