Maps 2
Hi i have a problem on my map and i don't know how to solve.

I placed a hero and a player will select (all work perfect). But when the hero is changed to another owner the trigger will detect the last owner when i want to trigger this

I wand a trigger or condition or action something but the trigger to no detect the last owner for that hero .

I hope you understand my problem if you do not understand something please post.

Icons 3 Maps 3
can u show the trigger when u change owner? 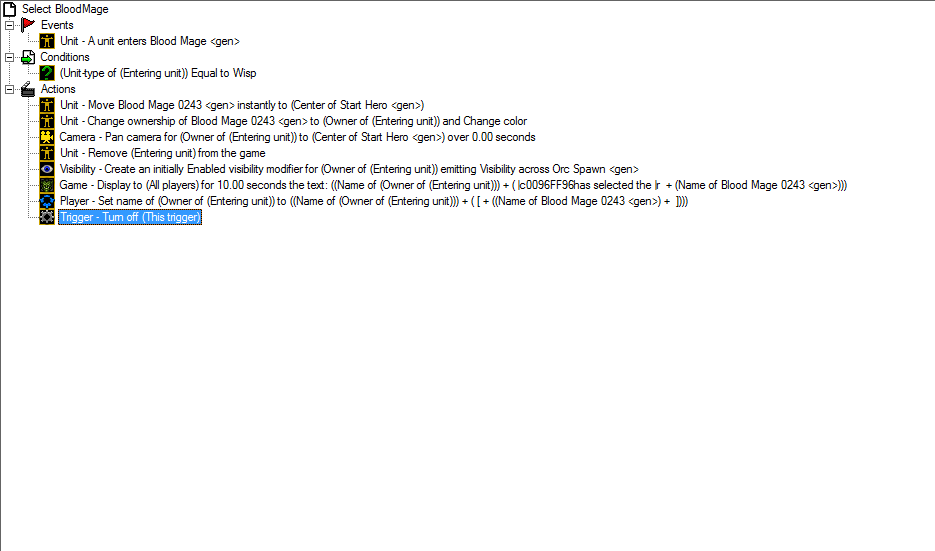 Icons 3 Maps 3
try create a variable with your current owner(after you change from previous owner) and then take/give gold to your variable player.

Maps 2
But my trigger will not refer on 1 player is for all player who is owner for that hero.

Maps 1 Spells 7
You have to understand what happens when you create triggers.
When you load the map, the game will run a function called the "main".
All your trigger events are placed inside that main function.

So in your main function, you create a new trigger and add the event to it:
<player>'s <variable> becomes <operator> <value>. (You don't have to understand it completely already )

Your event: "Player - (Owner of Blood Mage 0243 <gen>)'s Current gold becomes Greater than or equal to 1000.00"
Is the visualisation of the implementation of that weird stuff I just wrote.

First of all, who is the player that this event will work for?
<player> = (Owner of Blood Mage 0243 <gen>)
So the <player> will be the owner of that Blood Mage unit at the moment that the map loads.
That player (probably neutral passive) will now be linked to this event.

What happens is that now, we have the trigger all set up and ready to use.
When Neutral Passive's gold will be greater than or equal to 1000, we run this trigger.

So to fix your problem, there are two solutions:
1, we create a new event when the blood mage changes owner (the original event will then be useless so you can remove it).
This means that instead of creating the event when the map loads, we create the event when you select the Blood Mage.
There seems to be a GUI action that adds an event to a trigger during runtime.

2, we create a generic event (much more recommended and better for personal triggering/scripting/coding experience).
In this case, we create an event that will work for every single player, but adds a condition that you have to be the owner of the Blood Mage.
Because you use a preplaced unit, you can use that one, however I ussually use a global array variable to store the hero of each player in.
Then you can check if the unit type of the player's hero is equal to Blood Mage.
Then this trigger would work for all players that would have the Blood Mage as their hero.

In any case, it would work properly.
The first one is slightly easier to create but the second one is much more recommended.
Anyway, it is your choice.

Maps 2
Thanks for that i will have a much more to work because that trigger do not detect the current owner (why!!) only the initial owner . However i have 20 heroes to manage,make a select trigger for every hero , run (Advanced) AI for it and 10 player who can select the hero.

Spells 3 Tutorials 5
In that trigger above you delete the entering unit and then try to use its owner. It doesn't have an owner when it's deleted, so it can't work right.
The default owner is player 1(red).
You must log in or register to reply here.
Share:
Reddit Pinterest Tumblr WhatsApp Email Share Link
Top