This bundle is marked as useful / simple. Simplicity is bliss, low effort and/or may contain minor bugs.
View usage Statistics Legacy download
Reactions: Gumberbunbder, loktar, Null and 1 other person
Clerics heal people and teach warriors how to do sneeki-breeki, but what can this gentleman do? Imagine this - a grandpa with a swag hat on his head and some cool beard rains fire upon your head and sics hot babes on you, who splash you with water to death, while he thinks about many ways of rocking your base like a hurricane. Yep, meet "The Conjurer", a unit who'd be better described as a superior version of warlock.
also known to work in malls as Greatfather Winter during holiday season.. 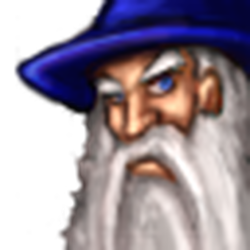 Models 36 Icons 29 Packs 2 Tools 3 Maps 3 Spells 7 Ported Icons 7 JASS 1 Tutorials 1
Another great icon I think it could use a bit more contouring though, so it matches the WC3 style a bit more.

Icons 329 Packs 18 Maps 48
Can you please brighten his face a little bit more, it seems over contrasted at the moment.

The Panda said:
Can you please brighten his face a little bit more, it seems over contrasted at the moment.
Click to expand...

Models 13 Icons 402 Skins 1
Simple but might be useful
You must log in or register to reply here.

BTNSlumbering Druid of the Talon

BTNSlumbering Druid of the Claw