This bundle is marked as approved. It works and satisfies the submission rules.
View usage Statistics Legacy download
Reactions: Sclammerz, Narandza, FRENGERS and 2 others
Requested by Firedragoner.
It's based on the picture below from WoWPedia. 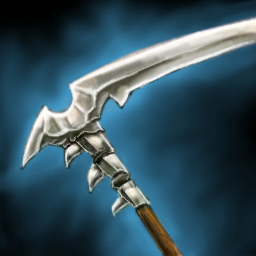 Import paths
Reviews
04:59, 16th Aug 2012 Apheraz Lucent: Extremely clear shape and definition, and beautiful execution as well; the only flaw is that it's standing way too out from the background: a soft white glow could fix it.
Read full review...

04:59, 16th Aug 2012
Apheraz Lucent: Extremely clear shape and definition, and beautiful execution as well; the only flaw is that it's standing way too out from the background: a soft white glow could fix it.

What do you mean? It's in the description.

He means the actual icon, not the inspiration

Silverfish423 said:
He means the actual icon, not the inspiration
Click to expand...

Models 1 Icons 10 User Interface 5
We want you to post the big image of the actual icon so that we can varify whether you simply copypasted the scythe from the original image or if you drew it yourself.

Icons 1
I know what you mean, and I did do that. However it is obvious that none of you are capable of seeing it. Won't the picture show if it's from a private album?

EDIT: Changed the album type, how about now?

Maps 1
So awesome... I wish there was a model for it

Icons 1
Damn... I prefer having my albums private since it's going to contain lots of junk that other don't have to see, but if that means the pictures in it (such as this big pic) isn't viewable when linked, it's just not worth it. So, album is public now, and the big picture should be viewable now (then again, I wouldn't know as I have been able to see it all along). If it still doesn't show I have no idea what I'm doing wrong.

Icons 309 Packs 18 Maps 48
Ok now that the big picture is present then i will review.

The wooden handle is way way too small, it looks like its gonna break instantly, also it could be zoomed in a bit also.

Models 63 Icons 23 Packs 1 Tutorials 2
You should zoom it in more.
You must log in or register to reply here.