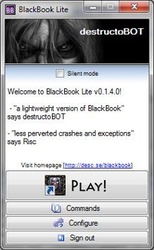 This tool originates from here

Please note: We have branched BlackBook into something we call 'BlackBook Lite' (version 0.1.1.0 onward). This version does not include the instant-messaging part, but has recieved a massive overhaul and lots of bugs have been fixed.

For news, see below.

BlackBook is a next-gen blacklist by two guys from Sweden.
It features global nickname/ip bans with an approval-system, auto-refresher, delay-reducer, automatic kicking of high latency and foreign players, voting-system, slot-saver, and more. It can to some extent also be used as an instant messenger.

BlackBook automatically recognizes if you are using an old version of the software, and alerts you of course, but we do suggest that you visit the BlackBook-website instead of using the download provided here.

Note: This has not been tested on Vista.

0.1.3 (19-04-2009)
- Supports Warcraft 3 patch 1.23
- New feature: users can "trap" their mouse cursor inside WC3's window while playing
- New feature: silent mode (no text output in the lobby)
- New feature: a "Launch"-button that starts WC3 in windowed mode
- Patch-fix: real-time changing of the hosting delay working again!
- Includes the newest version of SharpPcap with a bunch of bugfixes and improvements
- Countless small bugfixes and optimizations as usual

0.1.2 (04-01-2009)
- Added support for bans from WC3Banlist, more info in the imports-folder
- Implemented a secondary latency check which utilizes Battle.NET packets
- Added slot ratio to ban-messages
- BlackBook now alerts you if a friend on Battle.NET has joined a game
- BlackBook now plays a sound when someone leaves and when the game is full
- Re-enabled the "Select Countries"-button in the Config-form
- Added a button for easy access to all available commands
- A couple of minor bugfixes and optimizations