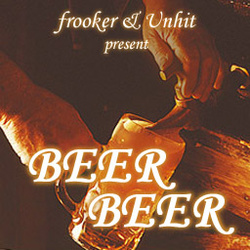 This was our entry for the Hive's first "Paired Mapping Contest", where BEER BEER was ultimately ranked second. Since the version we entered for the contest had been far from finished, we still continue working since then

BEER BEER is a hero defence map where teamplay is very important. All heroes are part of the town's guard, which has been partying really hard and is taken by surprise as the bad guys launch their attack! Therefore they have to continue consuming booze and stay drunk all the time, else they'll suffer from a hangover and would thus be uncapable of fighting.

It is no coincidence that the map version is still declared as 0.55. We are still having plenty of ideas for more items, heroes, bosses, mini-games/events etc. which we still plan to implement. Please follow the information in this thread if you are interested. We will keep you guys informed!

For feedback, questions, discussion on the map etc. please visit our thread on this forum or especially our facebook page which will always feature the latest information on BEER BEER and our other projects. The latest playable version will always be available for download here right away. You can also contact us here on the Hive, or message us on b.net (frooker / Unhit @ Northrend).

Thanks for downloading and enjoy playing!

P.S.: Even five years after the contest, this map still is not protected or anything. Please do not copy or edit without permission! If you are interested about anything that is in the map, just ask us. We won't bite

REUPLOAD #2: October 21st, 2007
A couple of bug and balance fixes, especially with bossfights. No new items yet, sorry - those will be in soon!

Reupload #3: October 18th, 2008
Earlier this fall, we finally started to work on the map again. This upload updates the map from version 0.28 to 0.34 and comes with many changes. Some bugs have been fixed, balance has been improved (both between classes and in PvE lineups). There's also a bulk of new items that allow for further specialization of classes and other fun features. Expect the next versions with even more items, abilities (and fun!

) to be ready in less time than this one.

Reupload #4: December 2nd, 2008
Work on the map continues! The most evident change in this version is the new loadingscreen. This version also comes with plenty of balance changes, especially for the Paladin, Warlock and Shadow Priest who (even though maybe harder to play than other classes) can now be regarded as equivalently strong compared to other classes. We still didn't implement armors yet, but expect these soon!

Reupload #5: June 21st, 2009
Well, we confess that the "expect armors soon" thing wasn't so true. But after a half year break, we are finally back to mapping. I just finished this new version which mainly comes with small bug and balance changes, most balange changes related to waves and especially bosses. However, we have some more ideas, especially concerning armors...so maybe...not going to promise anything this time, though

Reupload #6: November 3rd, 2012
October 2012 was finally the time when, after three years, we fixed the return bug. This version, however, doesn't only allow you to play again. The change from v0.38 to v0.55 comes with many changes. Please read the posts on page #5 of this thread for more details.