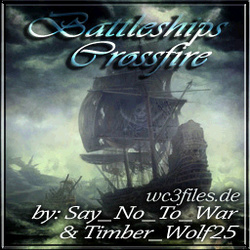 This is a 3 teams Battleships Mod. North, South and Goblin Empire are in Battle.

You control one hero-ship. All weapons are on autofire. Learn to fight on the right distance and angle to single target enemys. Three empires (teams) are in battle in a 4v4v2 match. North and South Empire have to defeat each other firstly. While that the Goblins can intervene to turn the tides. Chose out of over 70 ships with unike abilites and counters.

Battleships is a basic idea by sked. Today there are many Battleships mods. This one has prolly the most different features, such as fishing, whalehunting, doubling (2 uncombined weapons of the same kind double automatically one time to a doubled weapon to get a free itemslot), combining (2 doubled weapons can be combined by buying a combining to one weapon to get a free itemslot) and other things allowing different experiences and outcomes in every game. All tactics and ships have counters.