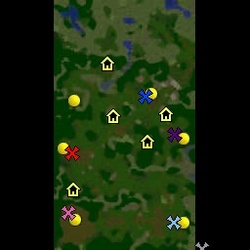 My Multiplayer Version of the Warcraft III: Reign of Chaos Final Campaign, Twillight of the Gods.

My Sunwell Plateau map, as you all have seen, was not very good, because it was rushed. But i intend to take more time on my maps!

This version is basically the same as the origional campaign, except all the triggers we're redone and added so that they affect all players, instead of only blue (Player 2) (Night Elves)

Archimonde's Model was replaced with his WoW counterpart.

Food for each player was reduced from a cap of 100 to 40 (Considering that it was initially a 1 Player Map, more players would make it easier)

Archimonde's Kite timer was modified so that if mass units are attacking him, he will use spells and fight most of them off, and if archimonde only has a few units attacking him (four or less, if they are tier 1.5 units and below), he ignore's them and walks to the circle of power. Archimonde does not ignore heroes. (especially Malfurion/Furion.)

Archimonde has also been modified so that he will use finger of death more frequently on a mass tower defence.

Archimondes Advance timer has been changed from the last 20 seconds to 1 min, making it much harder for players to win.

And sadly, i suddenly cannot host anymore, so it is up to you all to host my maps so i can play them with you all!

Moderator
01:30, 29th Jun 2008 Ash: "Archimonde's Model was replaced with his WoW counterpart."; please read the site rules before posting your map. I was looking forward to reviewing this, but it goes against site policy to approve maps with WoW models in...
Read full review...
Reputation Statistics
Show Ignored Content