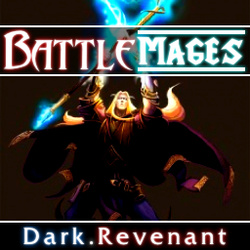 Update: The versions made between 1.6.0e and 1.6.6d are made by RushSecond, who was updating the map in my stead. I have resumed work since. See http://comclan.co.cc/forum/index.php?board=5.0 for the Battle Mages forum.

Battle Mages can be best described as a tactical battle involving only heroes and destructive spells. The goal varies depending on what game type you are using. Team Elimination is a team game where each player has X amount of lives. The last team standing wins. Deathmatch is a free for all brawl that ends when someone gets to X kills. Team Deathmatch is deathmatch with teams. Capture the Flag is self-explanatory. Assault is a double-round attacker and defender type of game.

There are currently 58 spells that can go into your 6-slot hand, as well as 16 ultimate abilities that are accessible from your ability card. You use your spellbooks to remove and add spells to your hand so that you can quickly activate them at a moment's notice. Spells are purchased at the shops at the top-left corner of the map, otherwise called the "base", the only place in which the two teams don't fight each other. Spells, in addition to gold, require spell points to learn. Spell points are gained by investing in your spellpower attribute, translating to 2 spell points per spellpower point.

The actual gameplay is heavy on aiming and dodging, and there are several unique or highly dangerous spells in each of the four classes: Fire, Ice, Lightning, and Arcane. Each class shares some similar types of spells, but they all have some unique things that make them have tactical value. Fire is great for dealing a lot of raw damage, but it all-too-often hurts your own teammates and yourself, and is generally difficult to aim correctly. Ice doesn't do as much damage as the other elements, but it has a crucial slowing ability that makes the victim much easier to target. Ice also has a couple abilities that completely freeze your enemies, but those are high-level and costly spells. Lightning is all about accuracy and speed, though there are a few special lightning spells that are slow and powerful. Lightning also possesses the ability to add "charge" to those it hits, increasing the damage dealt with future attacks if you can continually land hits on that player. Lightning is a well-varied element, but it is nothing in comparison to the range of uses found in Arcane magic. Arcane is very hard to generalize, but it is, in essence, both utilitarian and potentially deadly. From spells that form walls to a beam attack that deals mana burn damage to a couple homing projectiles to a holy bolt that heals friends and enemies, Arcane has a place in any strategy.

There are also hybrid spells available to those who wish to learn more than one element. This is a slower path, but is generally worth it in the long haul. To get a hybrid spell, all you must do is learn all of the spells of the same tier in two elements, and a predetermined one of your current spells will be replaced with a far superior hybrid version. There are five tiers of spells, numbered after how many spell points they require to learn. There are tier 2, 3, and 4 hybrids, no tier 1 or 5 hybrids. For all intents and purposes, tier 4 hybrids are regarded as ultimate spells; once you learn a tier 5 spell or tier 4 hybrid, you can't learn another. There are 18 hybrids to find, in total.

I hope you have fun with this map and its variety!