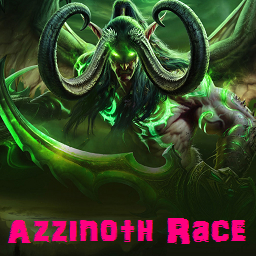 This bundle is marked as approved. It works and satisfies the submission rules.
View usage Statistics Legacy download
Reactions: JesusHipster and deepstrasz


To get the magic lands of Laerdria, the king Isterul has a crazy idea; make a race between the best warriors
of Azzeroth. And gives the land to the best racer.

In this game it's not the faster racer that will win, but the players that can deals a lot of damages or be sneaky
or tanky, they all have their chance, if they want to kill enemies. Good luck and get ready for this bloody Race.

For any questions or suggestions please send your e-mail at : [email protected]

One lap in this game is composed of 2 lanes. The first player that runs 10 turns (default see mode section), will win the game.
Any time a racer is killed or finished a lane the player will have an other random one. If a racer is killed he will restart at
the beginnign of the current lane with a new random racer.

This game support Ai. The Ai are not awesome but they move and blast enemies.

I advise player to play with a minimum of 6 players to get an interesting game.

Heart of Sergeras :
The demon help you with his powerful magic:
- Kill a Unit : Allow you to kill anyone unit on the map, exept the Eye of Sergeras.
- Exterminate : Kill every unit on the map exept the Eye of Sergeras.
- Invisibile : Turn your caster invisible during 5 seconds.
- Invulnerable : Turn your caster invulnerable during 5 seconds.
- Bonus Move Speed : Add to your racer 120 Move Speed during 5 seconds.
- Dispel Magic : Remove most common buffs on your racer.
- Sacrifice : Kill your racer and gives you instantly an other one.
- Return : Will replace instantly your current racer with the last one.
- Town Portal Scroll : The caster finish a lap at any location after 2 seconds delay.

The Heart of Sergeras restore his energy when a racer finish a lane. The game is set with a restoration of 30 manapoints
for 6 racers that goes throught the portal.

Commands :
There is a few commands in this map :
-view : to restet the in-game camera

Tips :
I advise you to put your Eye of Sergeras into the Group 1 by pressing Ctrl + 1 after selecting it.
Like it you can select it during the game by pressing the control "1". It is easier. 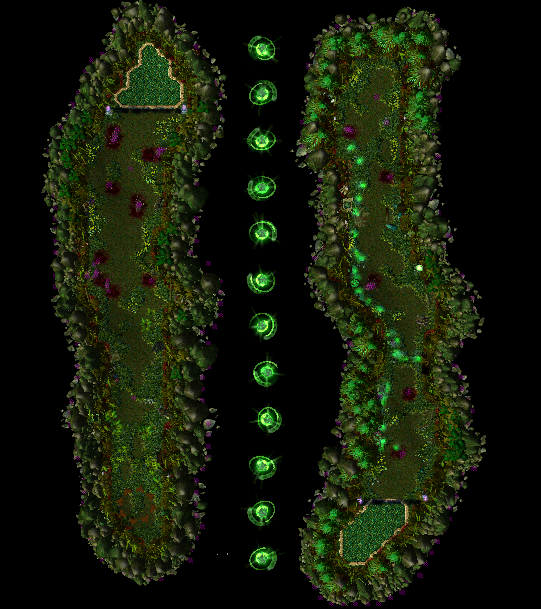 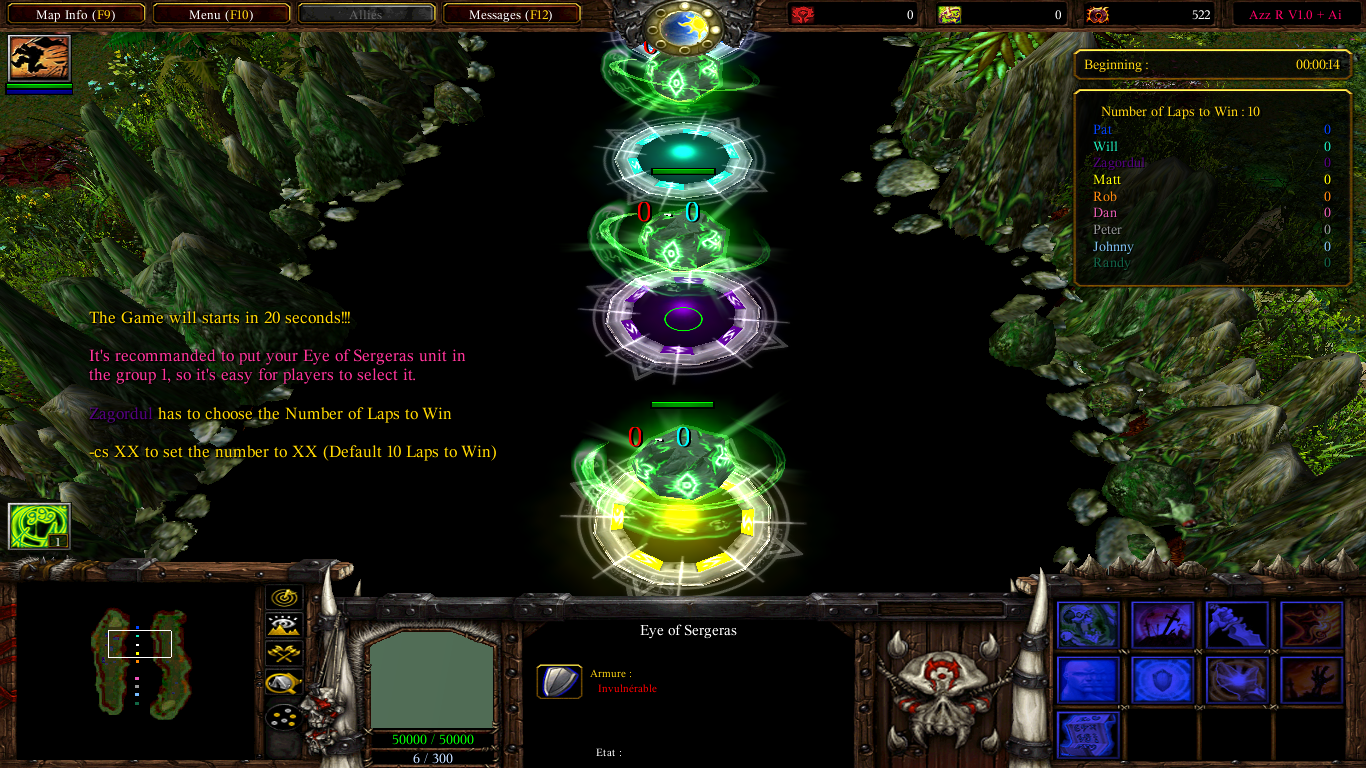 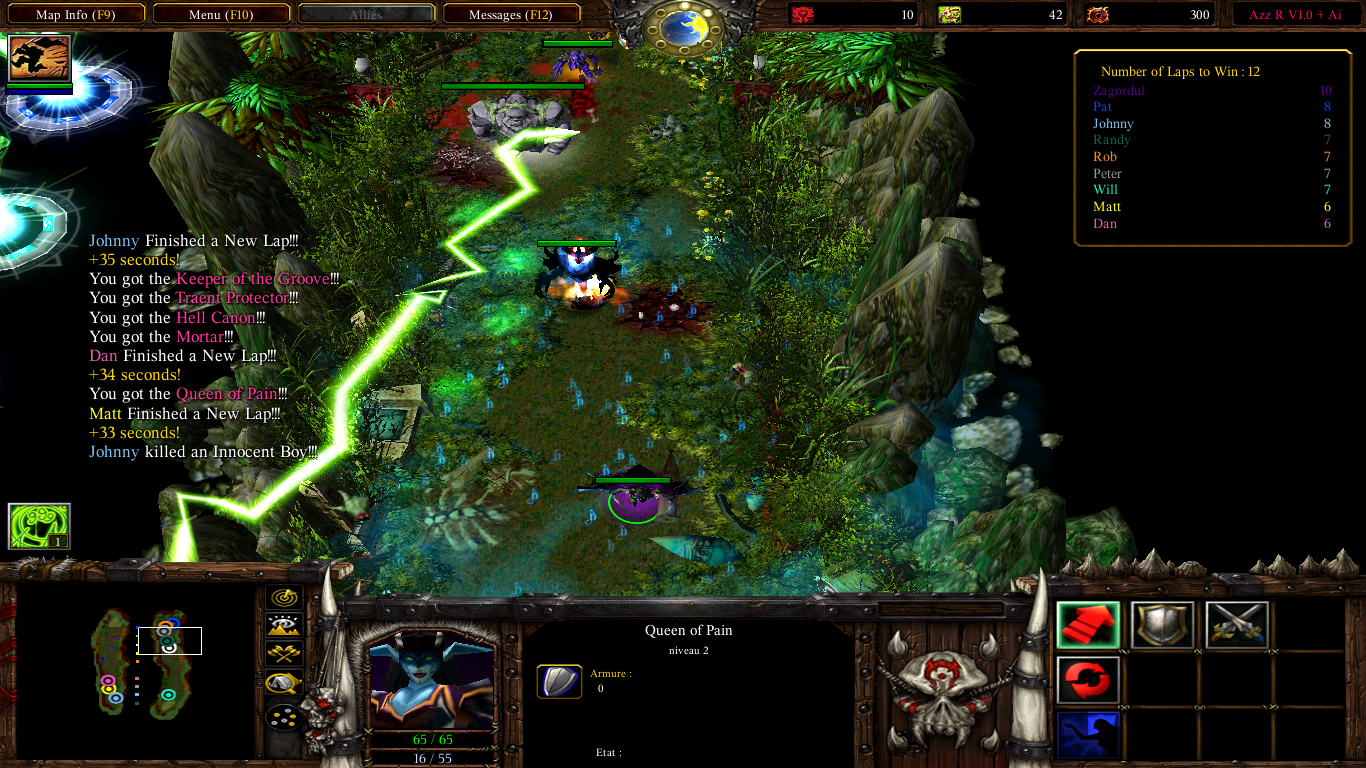 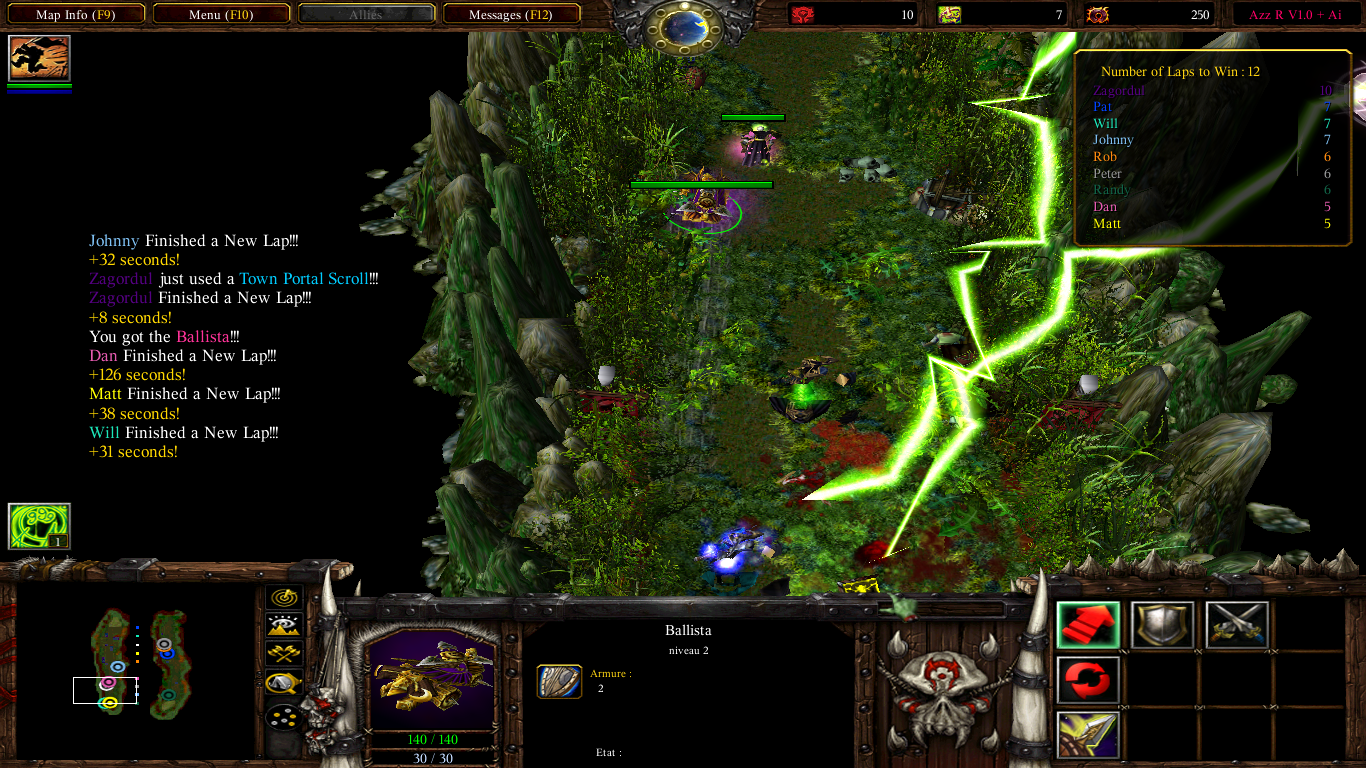 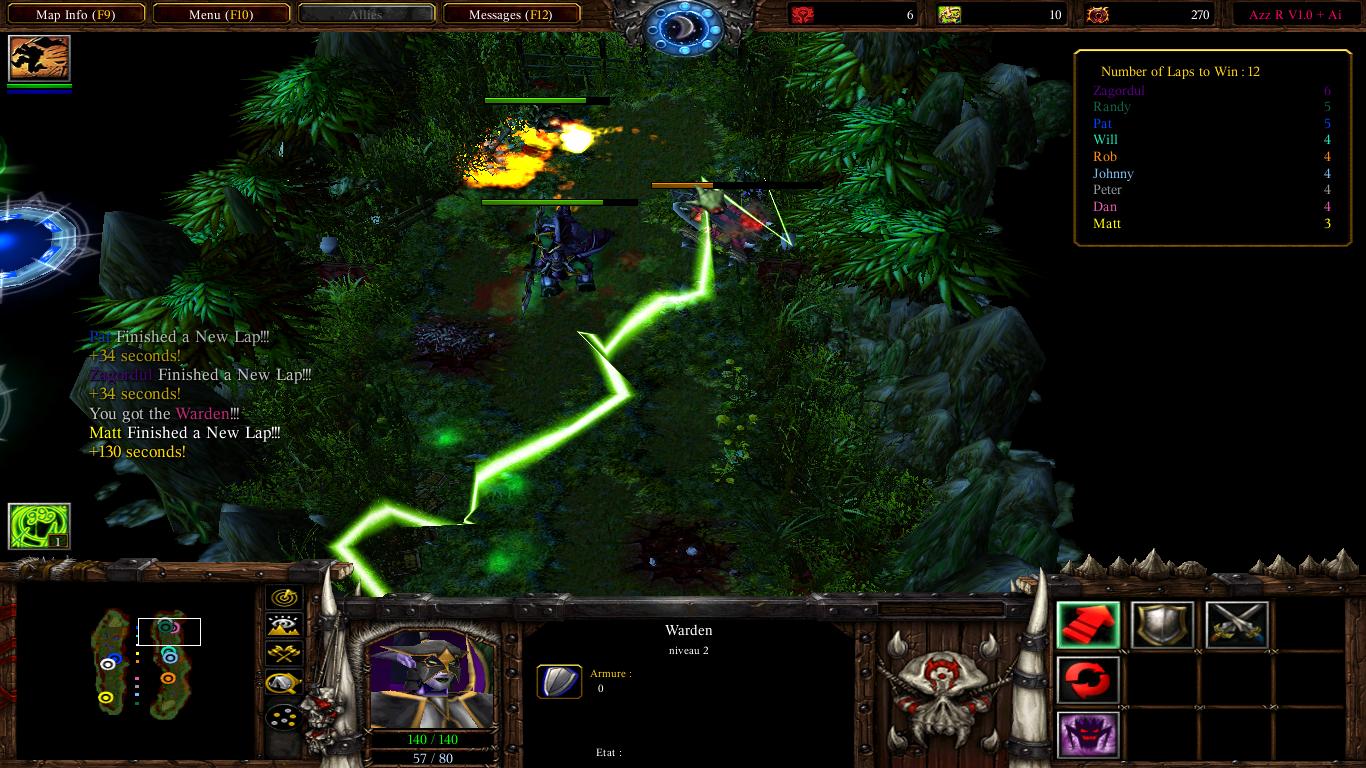 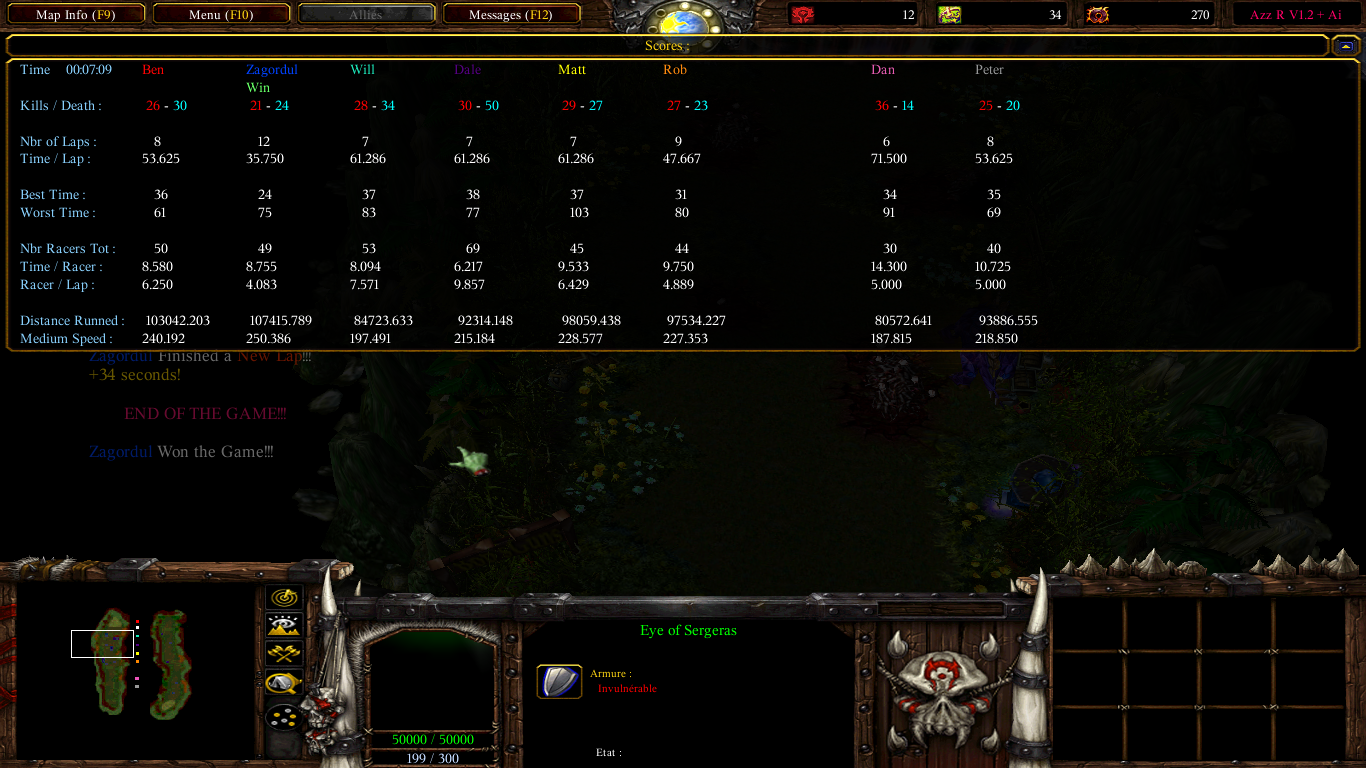 
To Kolle's for his pretty cool idea

I spent a lot of time and imagination creating that map, I hope you will enjoy it.
If you have some ideas about spells, events, modes, just send me an e-mail at : [email protected]

I appreciate feedback and suggestions!

Rufus
A pretty simple game, but working as intended, and can be a quite fun mini-game. Having the eyes of sargeareas with special abilities can be used efficently to balance the game, even if you get a shitty runner for a lap. It is fun that you get a new...
Read full review...

I'm glad to see that people download that map, I hope you will have fun with it, because me I love that kind of map.

I wanted to add some events, maybe a new mode, and add some racers.

If you have some suggestions or to report a bug you can send me a message.

Maps 14 Tutorials 2
A pretty simple game, but working as intended, and can be a quite fun mini-game.

Having the eyes of sargeareas with special abilities can be used efficently to balance the game, even if you get a shitty runner for a lap.
It is fun that you get a new runner on each lap, always with a different, strange ability, but that can be put to good use if used right.

The terrain is not bad. I quite enjoyed the void in between the race tracks.
I would suggest however, that you try to hide the scattered rocks that lies on the blackness. Perhaps even add a shadow effect, so that it looks like the rocks are coming frm the abyss.

Perhaps there could be some occasional obstacles aswell? Like neutral enemies, traps and such.

I liked it!
Map Approved.

That is awesome, I will try to improve the Ai and add some events

Have a nice day and a lot of kills

Maps 1
What 2 new racers are there?

Maps 1
You always make such great multiplayer maps and I have a blast playing them with my friends!

Great Minigame ! Fun to play on Sunday Mornings
You must log in or register to reply here.