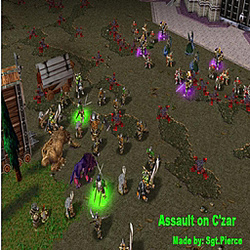 A strategy game designed for multiplayer. Each player has its own Hero, Special Units, Skills, Specialties, and Roles in battlefield. Conquer Farms, Outposes, and Finish your main objective. 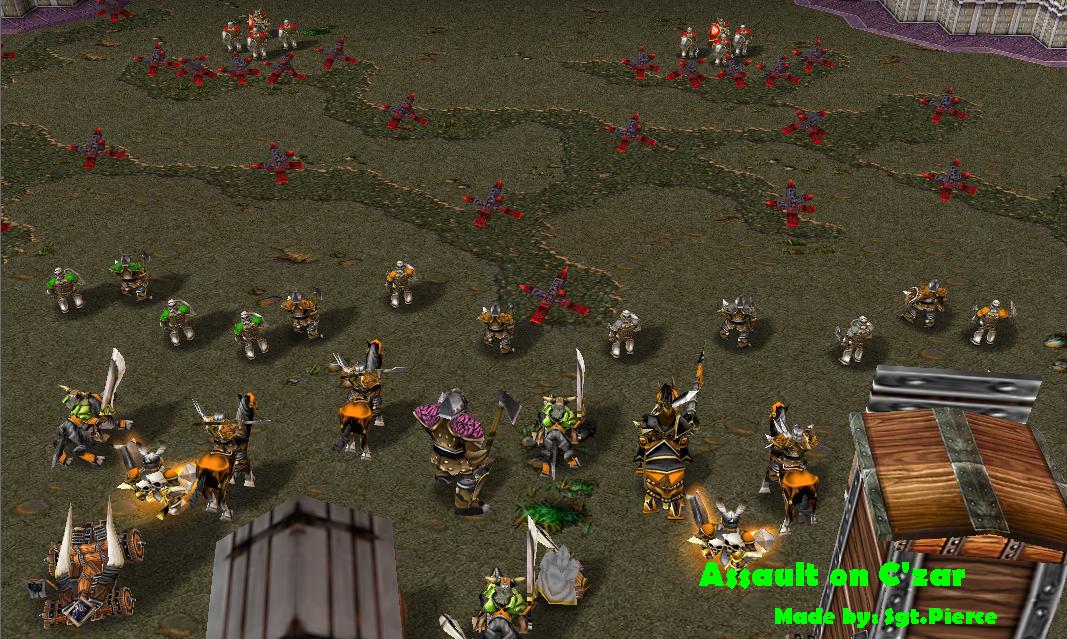 Assault on C'zar has features that makes the castle siege more realistic, that includes Siege Tower that can attach to the castle walls, Catapults, and Battering Rams. All units in here have skills, uses, and styles that makes the game more interesting. Outpost are strategically placed in the map, and farms that supplies units within range.

C'zar's Army:
-Kill the Assault Commander.
-The King must not die.

Barbarian Force:
-Kill the King.
-The Assault Commander must survive. 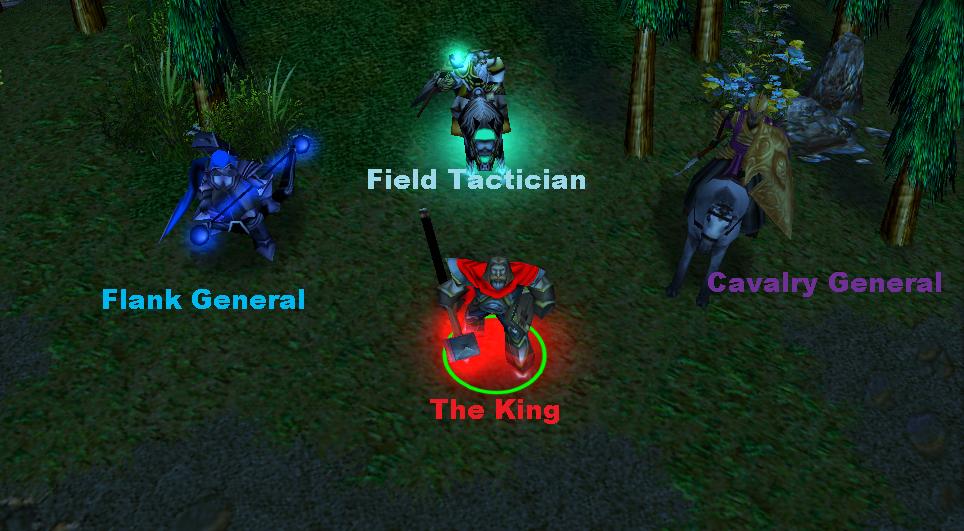 C'zar's Army:
Player 1- The King:
You have the Castle and the King. Do not let the King die, or you and your allies will be defeated!!

Player 2- Flank General:
Specialized at breaking number of enemies in the battlefield. 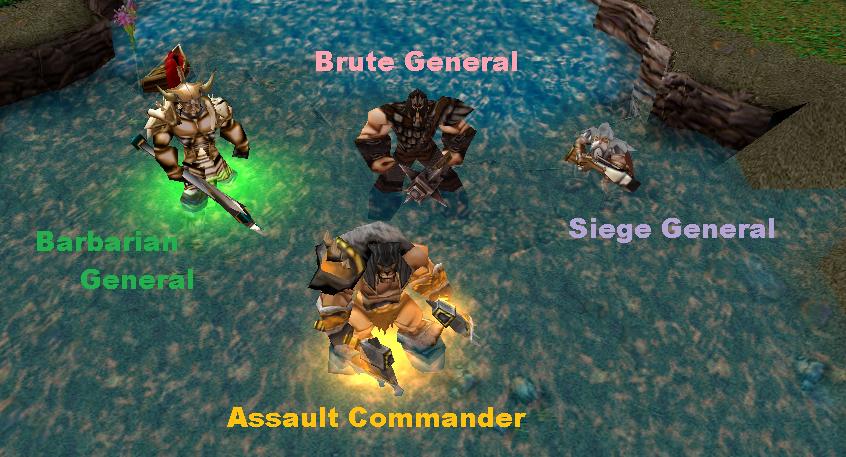 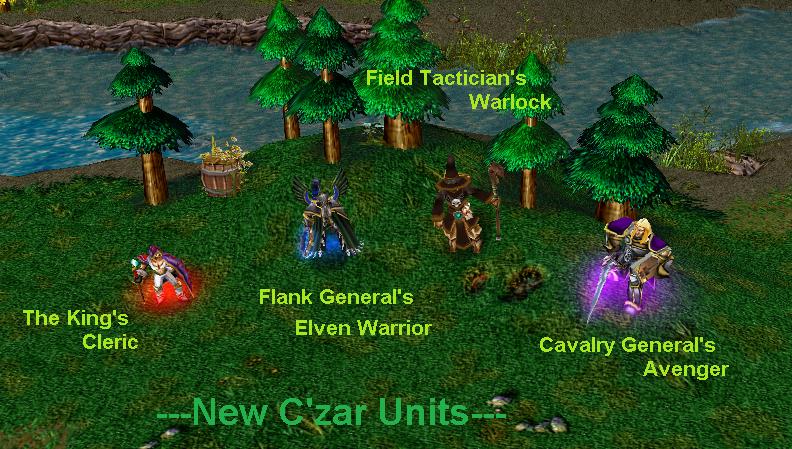 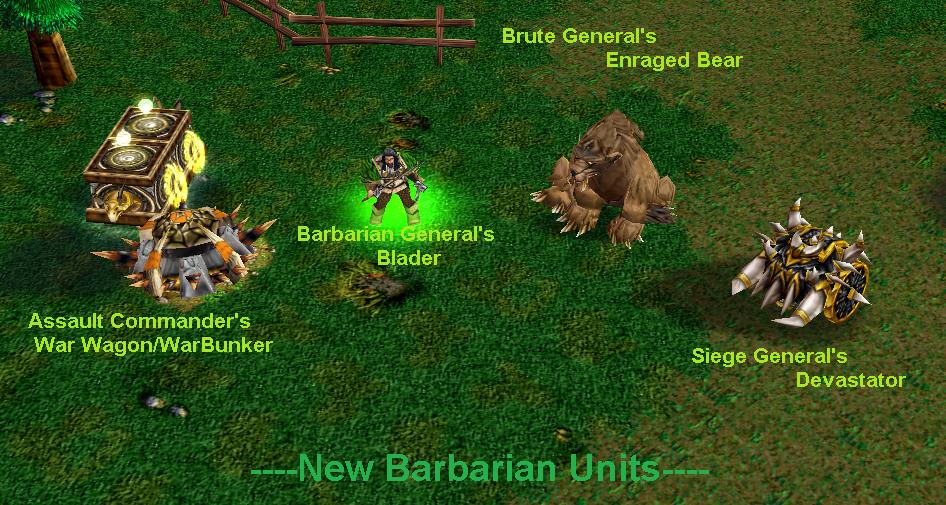 War Wagon- Has no attack, but it can deploy and turn into a War Bunker that can attack.
Blader- Light unit. Exceptional at killing units even heavily armored. Has Ripper Blades and Dual Sword Mastery ability.
Enraged Bear- Giant unit. Has Deafening Roar, Heavy Attack, and Pulverize ability.
Devastator- Siege equipment. Has War Flare and Stationary Mode ability. 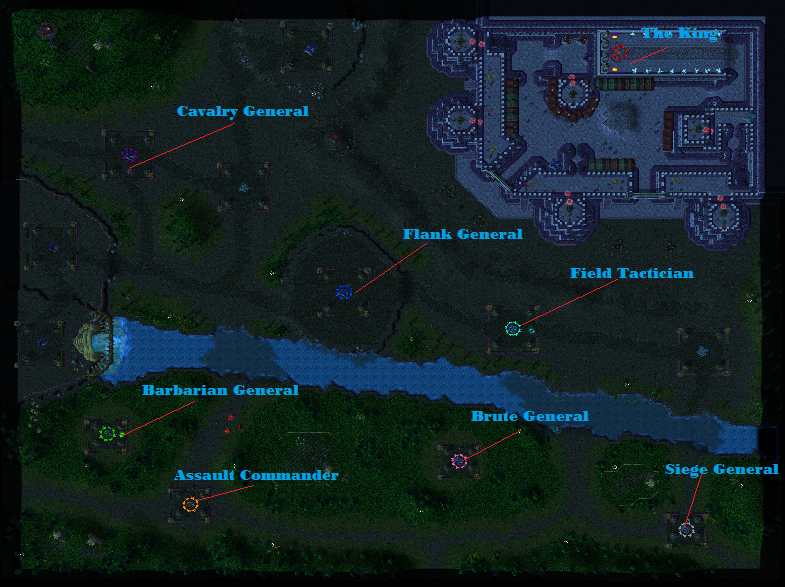 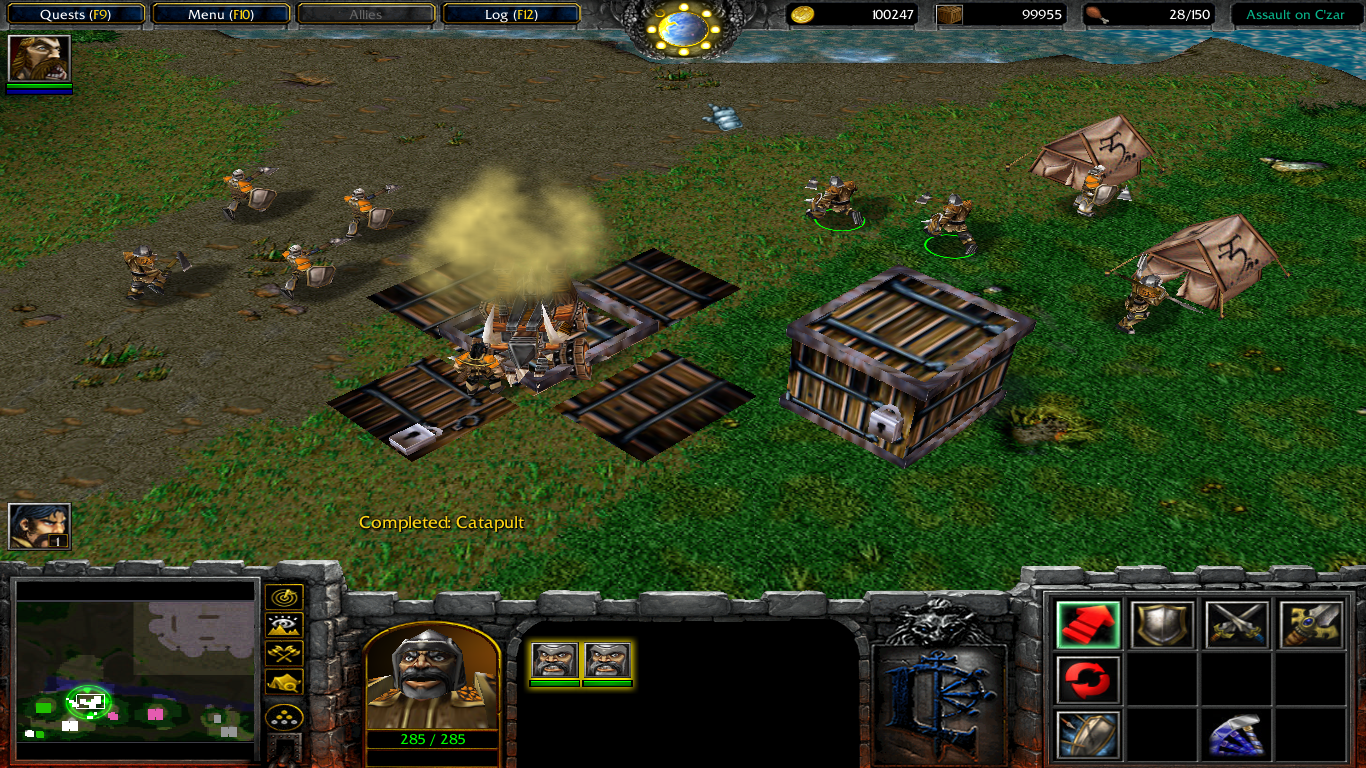 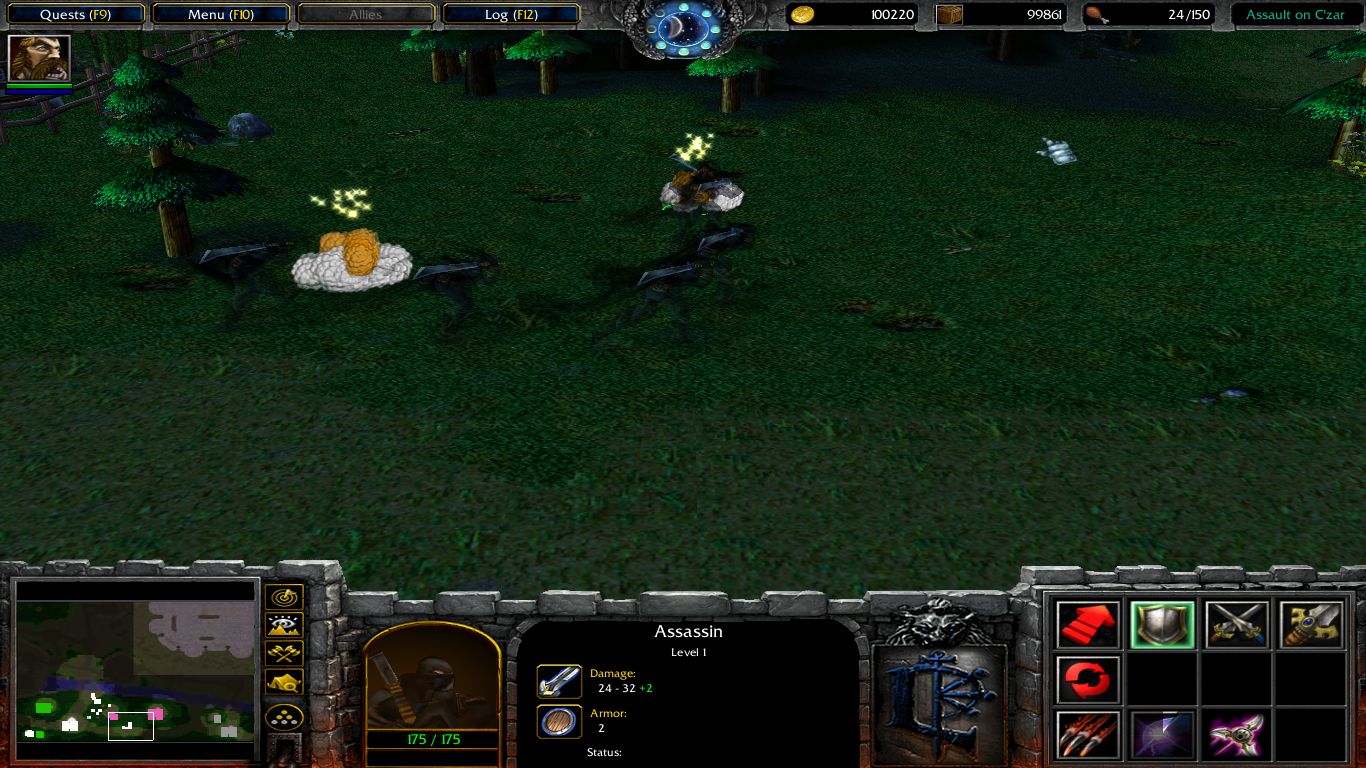 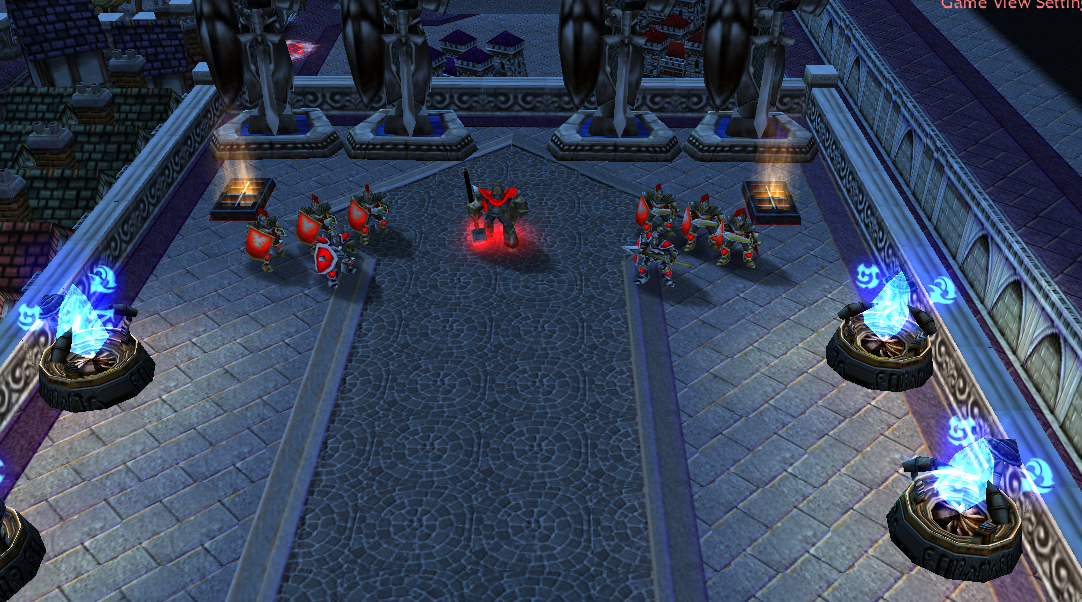 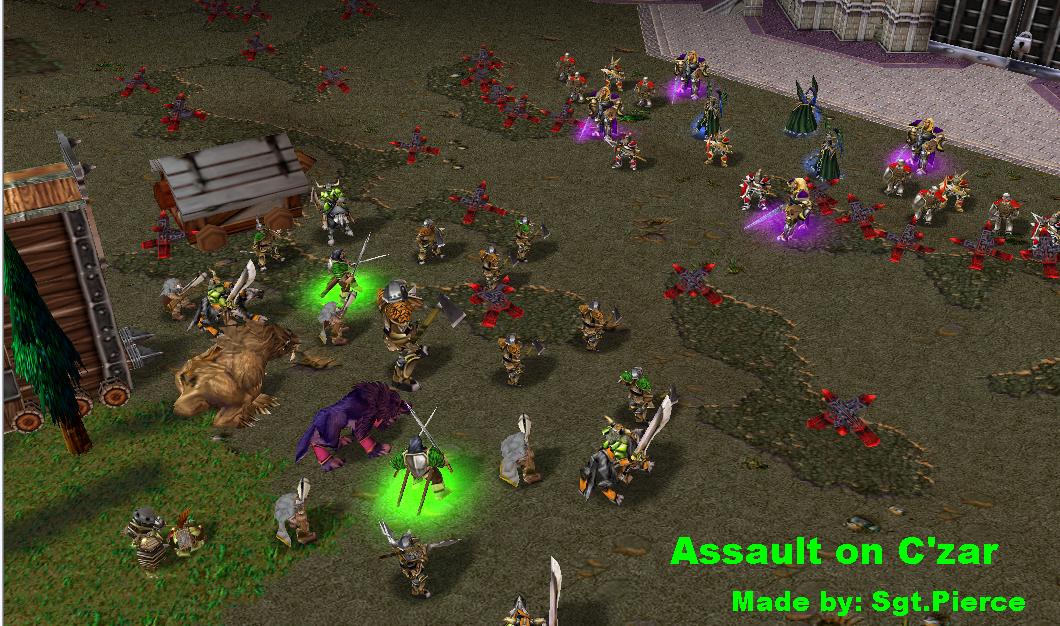 Thank you for the modelers for the Models i used!!

Special Thanks To:
Michael Ray Garcia- For ideas and skills.
Tonex- for the Gate Triggers!

If i forgot someone to add, please pm me on Hiveworkshop.com

Version 1.4
-Made some Balance improvements-
*includes health,damage,Training Time,AS,MS, of units of both Barbarian and C'zar Units.

Version 1.5
V1.5:
This update has small improvements, including bug fixes.

Note!: Some in here are not sure to be improved for the next version, maybe in some version updates.

Please review this game and rate!!

UPDATE is not in progress due to a reason...