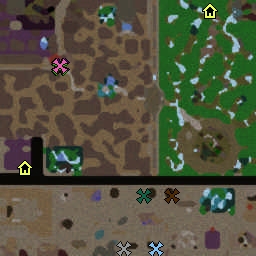 This bundle is marked as useful / simple. Simplicity is bliss, low effort and/or may contain minor bugs.
View usage Statistics Legacy download
First map I have finished and tested with Battle.net.
In the year 2885, a spaceship crashed inside a city. Inside the ship was found to be masses of alien creatures. A group of humans have been sent out to retake the ship, but the aliens have another plan.
There are 2 fractions. Humans and Aliens.
Humans are to find a safe place to build, and construct a safe place to survive. Then the humans must make thier way into the 'ship' and take back control.
Aliens are to either expand or just over-run the humans. No matter what the aliens do, they must have the ship for 45 minutes for victory.
Note that the first version has already been updated, thus this is version 1.1. It has been tested, and I have included some ideas brought to me by various testers (more likly, the most brought up ones). Enjoy.

Map Info View Resources In Use Preview Triggers
Reviews
17:06, 10th Apr 2009 by bounty hunter2: Although having some potential it yet lacks: - Better terrain - Tooltips are poorly written - No heroes - Grammar and spelling is horrible - No hotkeys - Models and icons used don't fit - It's...
Read full review...

- Better terrain
- Tooltips are poorly written
- No heroes
- Grammar and spelling is horrible
- No hotkeys
- Models and icons used don't fit
- It's supposed to be future, yet it looks like the dark ages

Rejected.
You must log in or register to reply here.