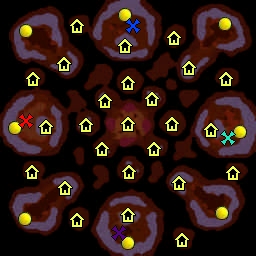 "Desolate floating isles are scattered in the void on the edge of Draenor. You must rely on mercenary air transports and ancient gateways to reach your enemies..."

This map features several islands separated by the dark void. You must hire zeppelins or use your own air units in order to strike at your enemies. There's also plenty of high level units on the map. And last but not least, there is a system of gateways spread out across the map on smaller islets. They are useful shortcuts for your air forces and may provide some other secrets as well...

This map is best played online, as the computer AI will not be able to use the zeppelins properly and thus cannot attack you successfully.

Thanks to Blizzard for creating WC3

Icons 2 Skins 2 Tools 3 Maps 10 Spells 5 Templates 5 Tutorials 6
Items are no no, remove lumber and gold from the ground. This is melee map after all
Then fix item drops, random items only, add artifact drop.
Connect areas differently, way gates are useless for ground forces.
Tavern is guarded, this is bad, you can't play with neutral hero from start.
Calculate Shadows.
Last edited: Oct 9, 2011

Your terrain does either support ai, and you can't have a place to take a normal battle. It will automaticly become a assault map, where it depends on who attacks first.

Also you have spread lumber and gold around the map, and your mob spawns, should drop random items.

I can see that you have made this mistake over and over again. Make sure you learn by this mistake, in your future of mapmaking

Tools 1 Maps 13 Spells 1 StarCraft II Resources 1
Remove the creeps around the tavern, it's nothing that useful in this map, might as well remove the creeps or just replace the tavern by a shop.
Also replace some of the fountains of health by mana fountains.
Also replace the doom guards in front of the goblin shops and put multiple smaller units there.
Remove the gold+wood bundles and add random item drop tables, not specific item drops.
It's a really cool idea, the map is symmetric, just do the things mentioned above.
You must log in or register to reply here.