They started to snail out.

Its a unit from the mission where kael has to repair 3 observatories, not the mage

ScrewTheTrees said:
Its a unit from the mission where kael has to repair 3 observatories, not the mage
Click to expand...

Maps 6
Two non listed but important for sd map makers (esp the first one) bug fixes:
Classic wisp (and I imagine other units with particles) portrait fixed when iseedeadpeople wasn't on (it dimmed very low for some reason).
Deep water no longer shows tiles below it, transparency of the water fixed to 1.26 levels.

4 bugs more from my thread remaining though.

Maps 1 Tutorials 2
Added a toast when a replay has been successfully downloaded.

Is appreciated. Well at least they took the UI into account, I thought they would focus more on the graphics glitches.

DracoL1ch said:
Added a toast when a replay has been successfully downloaded. 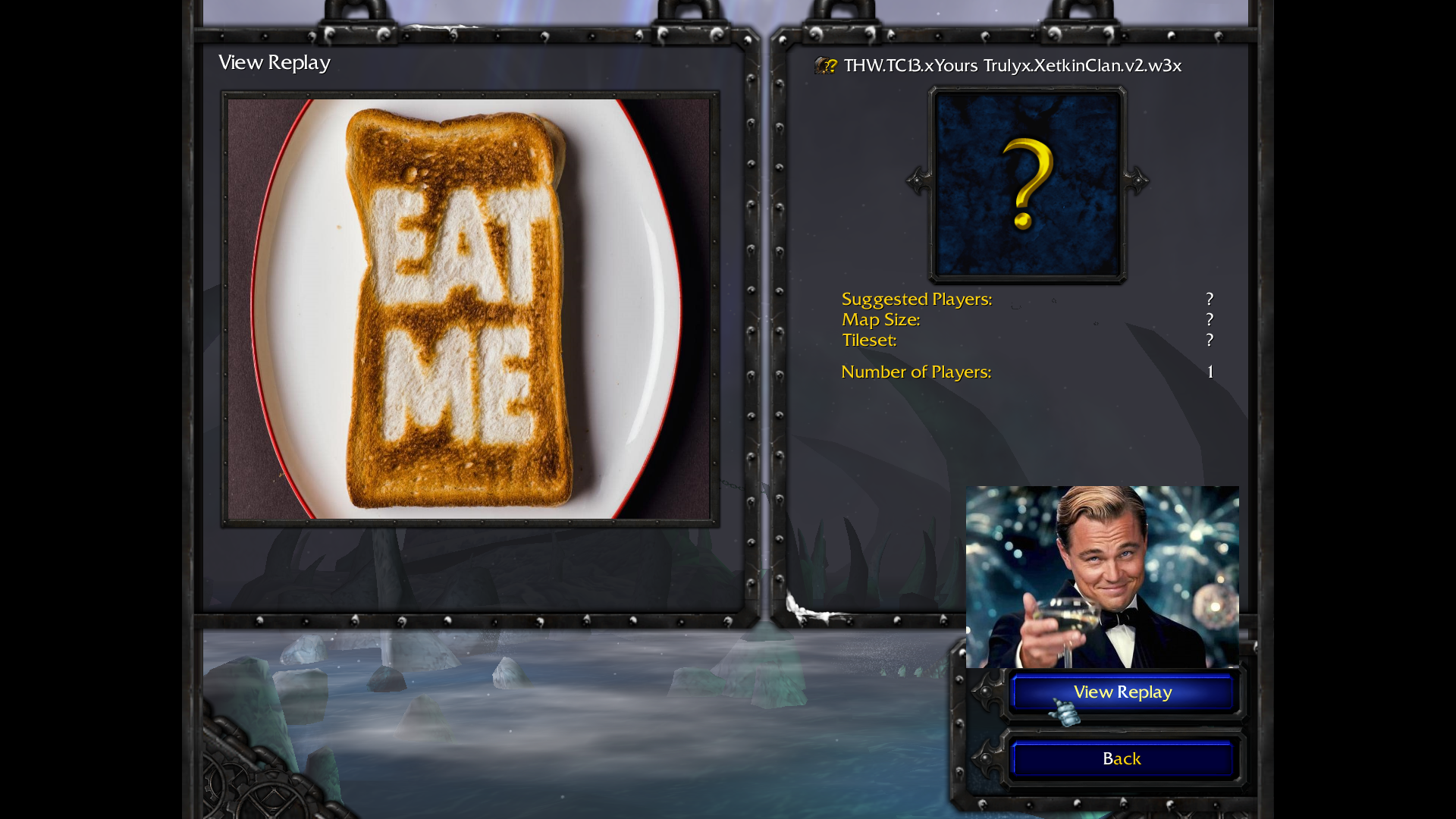 It's a meme dude.

Maps 1
My comments on CL: I just want to say, it has been really refreshing seeing a hero besides the DK being viable for Undead. Despite the number of people who complain about CL, the two best undead players still play the standard DK + Crypt friends, at least to my knowledge. If CL is further nerfed, then it will probably never have a chance at being a real option, in my opinion. Many people may say CL is being picked more often, but Archmage with its Water Ele is almost always chosen first for Humans. Being picked more should not equal being overpowered.

If anything, the CL beetles have provided what the undead race has always lacked: a strong T2 melee equivalent, since ghouls are too weak mid-game. Humans have spellbreakers, and orcs have raiders, but UD has always been lacking in melee unit choice before abominations. Unless CL is used by the best UD players instead of the standard DK + Fiends, I would hope the Blizz team will allow the CL to stay strong, because the same Death Knight + Fiends combo has, at least from my perspective, negatively affected Undead as a race for the past 15 years, both from a viewership point of view as well as from a playability point of view.

If I were balancing, it would be the impale that would be nerfed and not the beetles, because if the impale is strong, then UD will simply always pick it as a third hero (we want diverse 1st- hero picks, not always DK + Lich + a diverse 3rd- hero pick). Beetles, like any summon, are far weaker lategame, so weakened beetles won't effect people who just pick CL third for its impale as a supplement to its Nova/Coil power.

If anything nerf is required, I suggest put make beetle burrow dependant on the research for crypt fiends' burrow ability.

Maps 1
The reason I mention beetle burrow could/should be dependent on the crypt fiend's research ability is because right now, CL is pigeon-holed into just fast expansion. This means its upgrade to Halls of the Dead will naturally be far later, and since the burrow research needs t2 in order to research, it will delay beetles being able to burrow for a longer period of time.

I know I mentioned it above, but the main issue is CL is still not being used successfully over standard DK first by top undead players, so nerfing it despite this fact just makes me kind of sad that a new route for UD is being squashed right after it was brought to life.

kantarion said:
Can you please stop calling spell effects or footprints under ART or ART CHANGES, cause real changes are Art DESIGN changes.
Click to expand...

Obviously they are going for the whole "These changes do not affect gameplay itself and are only visual" which kinda-sorta falls under art. Even if I would personally just rename it to visuals.

DracoL1ch said:
Added a toast when a replay has been successfully downloaded.

Things I find important in short. Activision is thriving. Call of Duty Warzone is apparently a huge success. Activision MAUs have risen significantly, it's net revenues have almost doubled, and operating income has tripled. King is also doing really well, as expected. Blizzard doesn't seem to be doing as well, and their growth doesn't seem to be as big, especially considering the COVID-19 situation. World of Warcraft, Overwatch and Hearthstone were their only mentioned games.
Last edited: Aug 5, 2020

Maps 1 Tutorials 2
You woulnd't mention your fuckup on roundtable, no matter who you are or how deep you've fallen. That's OKish. Especially since nobody really cares, as you can see around.

DracoL1ch said:
You woulnd't mention your fuckup on roundtable, no matter who you are or how deep you've fallen. That's OKish. Especially since nobody really cares, as you can see around.
Click to expand...

Truth hurts. Better keep wrongdoings out of sight and play the angel.

At least Mod Quenching is an alternative to so much inattention given to Reforged by Blizzard.

fenix140 said:
At least Mod Quenching is an alternative to so much inattention given to Reforged by Blizzard.
Click to expand...

Well, either that, or LemonSky could be working on models for D2R (they did models for both ScR and Wc3R), heck I'm beginning to think they've stopped working on Wc3R models cause Blizzard told them to move on to D2R.

I don't see why they would be working on models for Regorged?

wow what a bunch of absolutely nothing, but hey maybe in a few years the game will finally have all the features the original 18 year old game had, what a joke
You must log in or register to reply here.
Share:
Reddit Pinterest Tumblr WhatsApp Email Share Link
Top