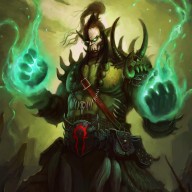 For the Lich King and his creator Ner'zhul, Male, 23, from London